RELIVING THE POP MUSIC OF THE 1960s 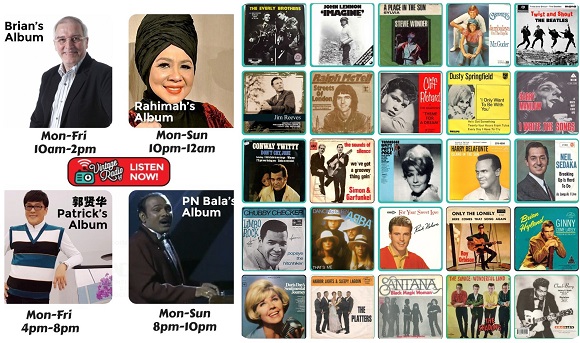 During the long months of stay-home, my daily dose of feel-good endorphins came not only from exercising but also from music. I have always enjoyed listening to music across many genres, graduating from jukebox top hit singles during my teenage years, to rock, blues, R&B, country and folk. I remember meticulously copying by hand hundreds of song lyrics into a songbook to sing along to. Those were the pre-Spotify days of radio and vinyl records.
Imagine how excited I was to discover Vintage Radio Sg a few months ago. It enabled me to relive the 1960s pop music scene again. There are four DJs helming the shows, spinning records for in English, Malay, Chinese and Tamil for listeners in Singapore, Malaysia, and the diaspora. The radio runs 24/7. I do dancercise to Brian’s selections every morning. He has an encyclopedic knowledge of 1950s-70s pop music.What amazes me is that I can remember many of the lyrics even though I last heard the songs more than 50 years ago! Proof that the last thing we lose when our memory fades is music.
(Click on Vintage Radio Sg and find out more about the shows and other goodies there, all specially curated for seniors. You can download the app on your phone. Doesn’t take up much data.)
In my high school days I lived on a music diet of Britain’s Top of the Pops, and later Casey Kasem’s American Top 40 and Billboard Top 100 on the radio. I never missed Dick Clark’s American Bandstand on our family’s black and white TV. In my late 20s, I was crazy enough to apply for a DJ position at Tin Mine discotheque, Hilton Hotel. The interview with Juliana’s of London included testing my knowledge of popular songs and singers. I did a tryout at deejaying one night. I decided it wasn’t for me, and dropped out of the shortlist of applicants.

My friends and I were into the latest dance craze as well. We did the jive, rock and roll, twist, ago-go and rumba to bands like Bill Haley and the Comets, The Shadows, The Ventures, The Beach Boys, The Cascades, The Monkees, the Beatles and so many more. They were the forerunners of today’s boy bands and K-Pop groups.

(Above) Who can ever forget ‘Shanty’ by The Quests? I was still in high school when it shot to the top of the charts and stayed there for months.
The 1960s music scene also saw the rise of local bands in Malaysia and Singapore doing cover versions of top hits. They had quite a following among university students, and regularly played at tea dances and concerts. Some of them like the Teenage Hunters, the Falcons, and the Quests (above) were so good they did gigs overseas in Germany, Hongkong and Vietnam.
The recording studios were quick to sign up these bands and singers. Virtually every one of them released 45rpm records of their songs. There were Naomi and the Boys, Keith Locke (later replaced by Vernon Cornelius) and the Quests, the Ventures, the Stylers, the Blue Diamonds, Matthew and the Mandarins and others. There was also a proliferation of Malay and Chinese singers and their back-up bands like Jefrydin and Pop Yeh Yeh, and Rita Chao dubbed Queen of A Go-Go, the dance craze at the time, especially at the popular Sunday afternoon tea dances.

(Above) Matthew and the Mandarins made famous their original country hit ‘Singapore Cowboy’.

While some of the 60s era singers and musicians have passed on, those that have remained never gave up their passion for playing music. They continue to perform at fund-raising events, reunions, and corporate functions. Others, like my friend Jimmy Lee, have been keeping the memory of Elvis Presley alive via the Elvis Presley Friendship Club of Singapore. Credit also goes to the Singapore government for promoting 1960s music with free concerts in October in conjunction with International Day of Older Persons.

I attended all three of the above Elvis Tribute concerts in Singapore. Click on the links below to enjoy the videos I took of the performances.
https://www.seniorsaloud.com/2017/08/elvis-is-still-in-building.html and
https://www.seniorsaloud.com/2018/08/my-elvis-experience.html
Then there are those, both musicians and fans alike, who gather at each other’s homes to jam and sing all those favorites of yesteryears. These get-togethers are always fun. Research studies show that music is therapeutic. It helps to improve wellbeing and reduces the risks of Alzheimer’s.

D-Asiatics (above) playing a cover version of ‘Midnight in Malaysia’ made popular by Boy and His Rollin’ Kids.
(Above) Mike Ho & Company: Chow on drums, Paul on rhythm, Jimmy Rampas on bass guitar playing The Shadows classic instrumental ‘Apache’.

(Above) Alfred Ho was the winner of Malaysia’s first national talentime contest in 1971, and was in Asia Got Talent 2017. All three judges loved his singing. He was busking weekly at KLCC LRT station until the MCO shutdown forced him to stop in March 2020. He has since retired but his CDs are still available on sale at RM30 a copy. You can reach him at 012-3461232.

Music keeps us feeling young, energetic and socially connected. If we can’t play an instrument, we can sing, or dance to music. Music feeds the soul and nourishes it. We need music in our lives. Period.

http://www.seniorsaloud.com/2014/03/finding-joy-solace-and-therapy-in-music.html
This article was originally published by Seniorsaloud.com. Read the original article here.
Previous Post Confessions Of A Frugal Millionaire
Next Post Is a Tiny House the Big Solution for Your Retirement Plan?