Over the past 16 months, the use of margin debt has spiked dramatically.

That has me worried.

Margin debt is money that individuals and institutions borrow against their stock holdings in order to buy more stocks.

It does the opposite when things head south.

The link between the use of margin debt and the stock market is pretty clear.

The chart below shows the huge increase in margin debt that has occurred since the bottom of the COVID-19-related stock market crash in March 2020.

The chart also shows two smaller spikes in margin debt that happened in 1999 and 2007. 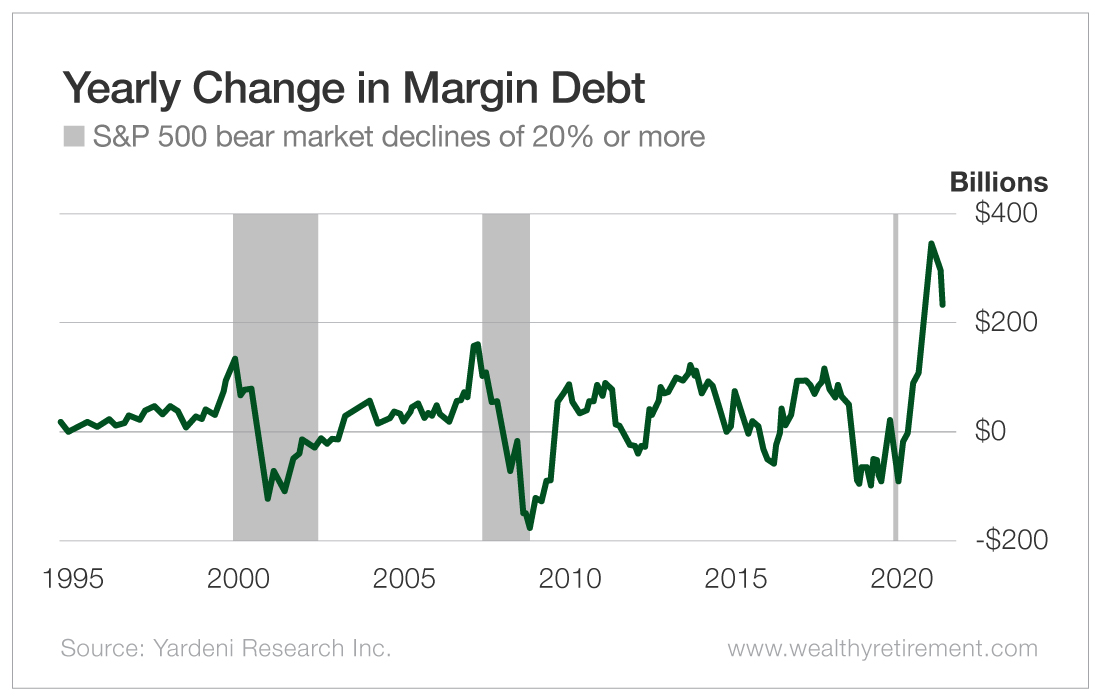 If you know your stock market history, you know that 1999 and 2007 were memorable years.

Memorable for all of the wrong reasons.

What followed was a brutal bear market.

I remember it well.

Again, this was followed by another painful stock market rout.

That crash didn’t last as long, but it was more severe.

I remember that one even better.

The chart above shows those two margin debt spikes and two instances in which the entire S&P 500 was cut in half.

Now here we are again.

Margin debt has again spiked, and as you can clearly see in the chart above, it is spiking in more extreme fashion.

I suspect you know what probably happens next.

You probably noticed something in that chart.

I’m surprised that this decline hasn’t received more attention in the media.

When margin debt starts rolling over after a big increase, it’s almost always a bad sign.

With margin debt now appearing to have peaked, there really should be a lot of people running around in the financial media yelling “Fire!”

Historically, one year after a peak in margin debt, the S&P 500 has been down 71% of the time. The market undergoes a median decline of 10.7% each year after margin debt peaks.

That is the median.

When margin debt spikes sharply, like it did recently, the one-year (and multiyear) decline tends to be a lot larger than the 10.7% median…

In fact, big spikes in margin debt tend to be followed by nasty bear markets.

The fact that margin debt declined in July and the stock market has continued higher is quite unusual.

When margin debt rolls over, normally the stock market immediately does the same.

Honestly, I don’t quite know what to make of that. But what I do know is that this is definitely a time to be cautious as an investor.

We need to mentally prepare ourselves for the fact that the stock market ride could soon get bumpy.

I’ve noted in recent months that, on a valuation basis, the stock market in the United States has become stretched.

You can circle back on my thoughts here, here and here.

With what is happening with margin debt, speculative excesses in meme stocks and market valuations near historic highs, there are just too many warning signs that the stock market is getting into dangerous territory to ignore them.

In the long run, owning stocks is still going to be rewarding.

In the shorter term, there may be some unpleasantness.