I’m getting cautiously optimistic for my parents.

After working and saving diligently for decades, they have earned next to nothing on their hard-earned savings thanks to historically low interest rates.

They’ve done everything right but have been robbed of their expected retirement income by central bankers.

But watching U.S. Treasury Secretary Janet Yellen’s evolving view on inflation, I’m beginning to think that my parents – and retirees at large – are soon going to be getting a raise.

In January, Yellen said she wasn’t worried at all about inflation. Two months later, in March, she said inflation risks were “small and manageable.” In June, she acknowledged inflation had become elevated but assured us it was only “transitory in nature.”

Now we’re in October, and Yellen is finally admitting that our high rate of inflation is here to stay awhile.

The inflation genie is out of the bottle, as you can see below. 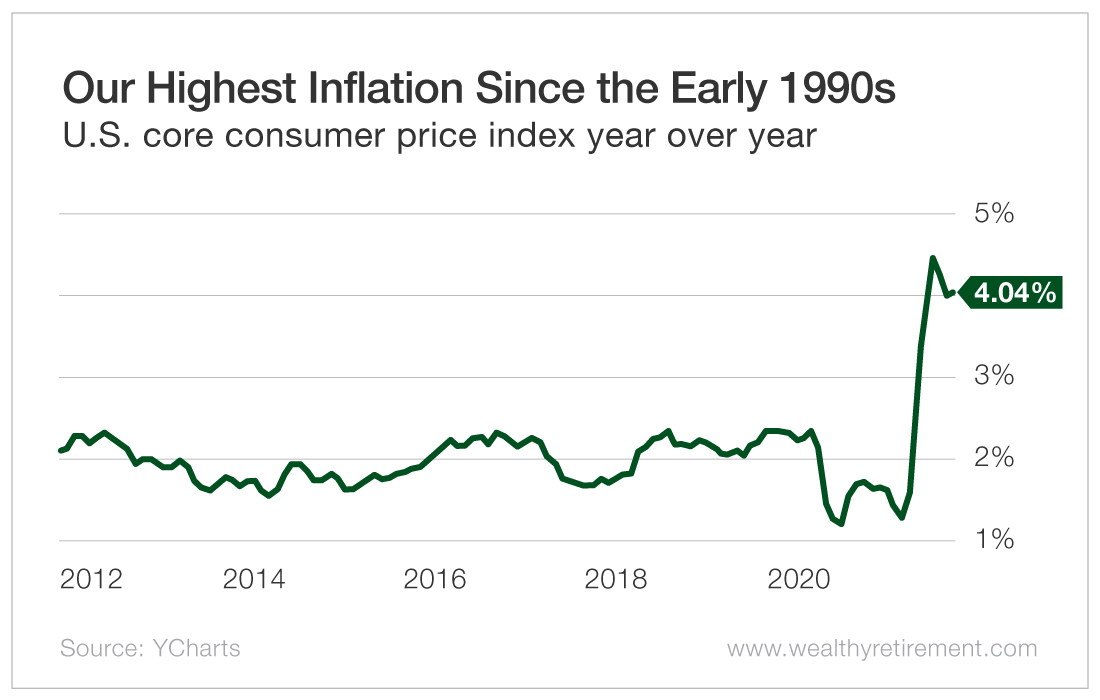 At last check, Yellen said that high inflation will be with us until at least the middle of 2022.

But let’s be honest…

She has no idea where inflation is going, and neither does anyone else.

Here’s what we do know… First, the actions of central banks around the world since the start of the COVID-19 pandemic have primed the pump for inflation like at no other time in modern history.

The risk of astronomical inflation has never been higher.

History provides a pretty clear view of where interest rates may be going.

The scatter plot below matches historical interest rates for the U.S. 10-year Treasury with the corresponding rates of inflation for every month since 1991.

Each dot represents where a month falls. 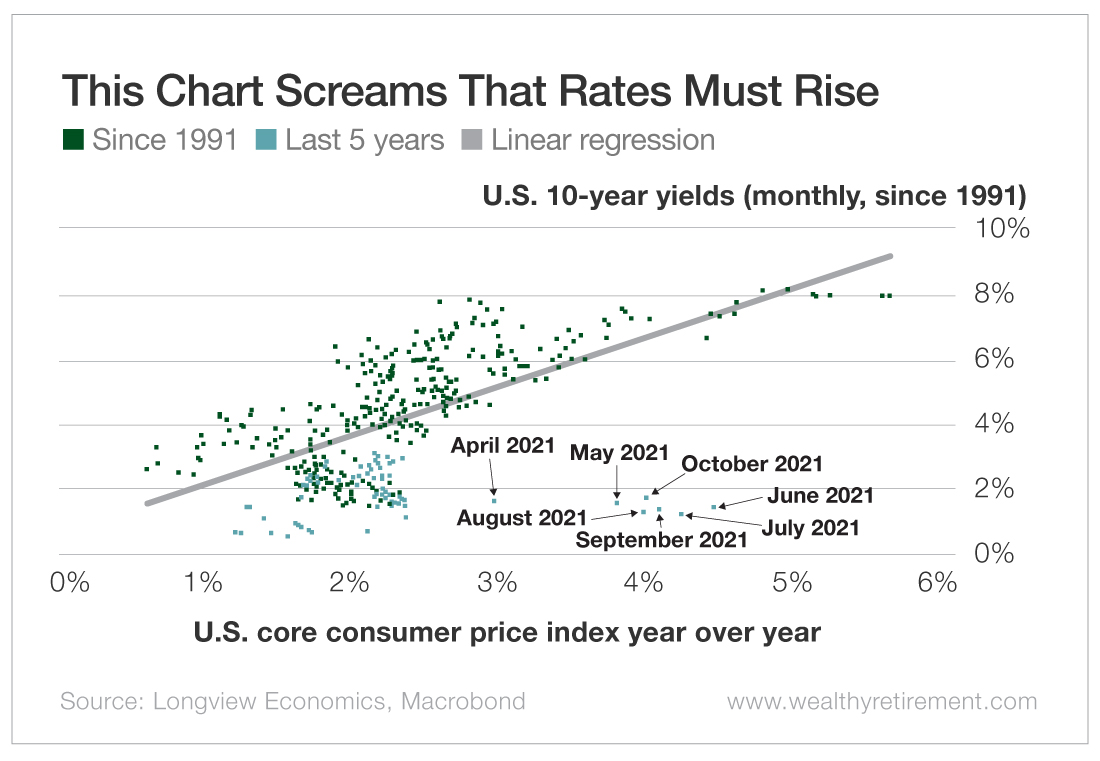 As you can see, almost all of the dots fall somewhere along the plotted trend line that moves upward and to the right – except recent months, which are blatant anomalies.

The trend line establishes where the 10-year Treasury bond rates should be based on the existing level of inflation.

At 2% inflation, the trend line shows that the 10-year Treasury should yield more than 3%.

And at 4% inflation, our chart predicts the 10-year Treasury yielding 6%.

With current core consumer price index (less food and energy) inflation readings in excess of 4%, the trend line on this chart tells us that the 10-year Treasury should currently yield as much as 7%!

Instead, we have a 10-year Treasury yield of just 1.6%, which is far below where history tells us it should be.

That means if inflation stays at more than 4%, interest rates have to move up significantly.

If that happens, it wouldn’t be good news for borrowers.

In 1990, when inflation was last comparable to what it is today, the 30-year mortgage rate in the United States was more than 10%! 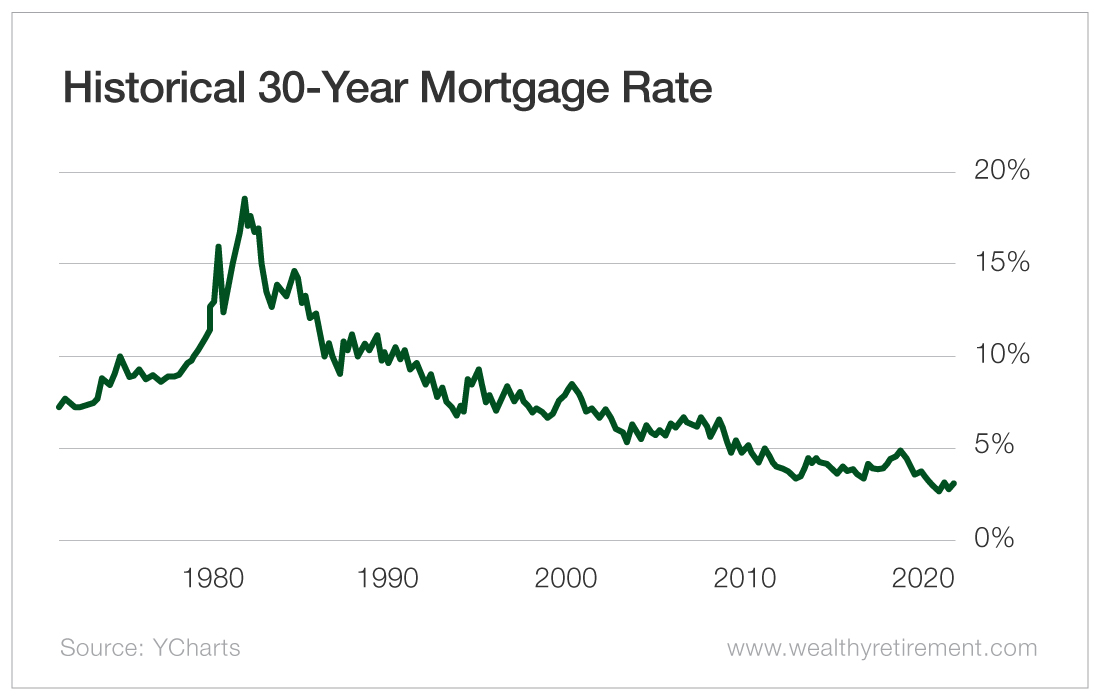 But for savers and seniors like my parents, a return of 1990s interest rates would be most welcome.

My parents have most of their savings in term deposits that are currently earning almost nothing.

For perspective, consider that if a retired couple had $1 million in five-year term deposits today, they would earn only $7,000 on their initial investment.

At that rate, $1 million in a five-year term deposit would produce $80,000 of passive income.

That would be a much more appropriate return on a lifetime of savings.

For my parents and others like them, an appropriate return to 1990s interest rates would mean an exponential increase in their passive income.

With the current rate of inflation, history suggests that could be what’s coming.

Keep that in mind as you look ahead.

This article was originally published by Wealthyretirement.com. Read the original article here.
Previous Post What Advice Would Your 80-Year-Old Self Offer to You Today?
Next Post Julieanna's recovery: "I will always be so grateful that I came here."