Should You Swipe Right on Buybacks?

There’s a common comparison that equates stock buybacks to dating and dividends to marriage. I think that’s unfair to dating. Some people date hoping for a little action. But many people date looking for love and a long-term relationship.

I’d compare buybacks to Tinder, the dating app that is mostly used for one-night stands or casual hookups. See something you like? Swipe right, and you could have Barry White playing in the background in a few hours (though, I doubt most people who use Tinder own any Barry White albums).

While buybacks are popular, they’re often a terrible use of cash.

A stock buyback is exactly what it sounds like. A company buys shares of its own stock in the open market. The purpose of this is to reduce the number of shares, thereby increasing the earnings per share.

So the company’s earnings per share jumped 11% even though its actual profits stayed flat. That’s management putting tight jeans on earnings.

Dividends, on the other hand, are usually a long-term commitment. When management pays a dividend, it is setting expectations that investors will continue to get paid well into the future, even when things aren’t perfect. Management knows that if it cuts the dividend, the stock will likely get punished.

Your beloved may leave the seat up or squeeze the toothpaste the wrong way, but you know they’ll be there for you in sickness and in health. Same with dividends. A company may hit a rough patch and have some weak quarters, but if it’s managed correctly, investors will still receive a dividend regardless of what the stock price is doing.

And get this, stock buyback announcements aren’t even binding. It’s like setting up a date and then deciding not to show up.

When a company announces a buyback, it is not under obligation to actually buy back the shares. It can do it at management’s discretion.

And that discretion is up to management that has a track record of buying back shares at the absolute worst times – typically when stocks are high.

As you can see in the chart below, buybacks are at their highest when the market is at its highs, like in 2007. They are steadily rising during the current bull market. 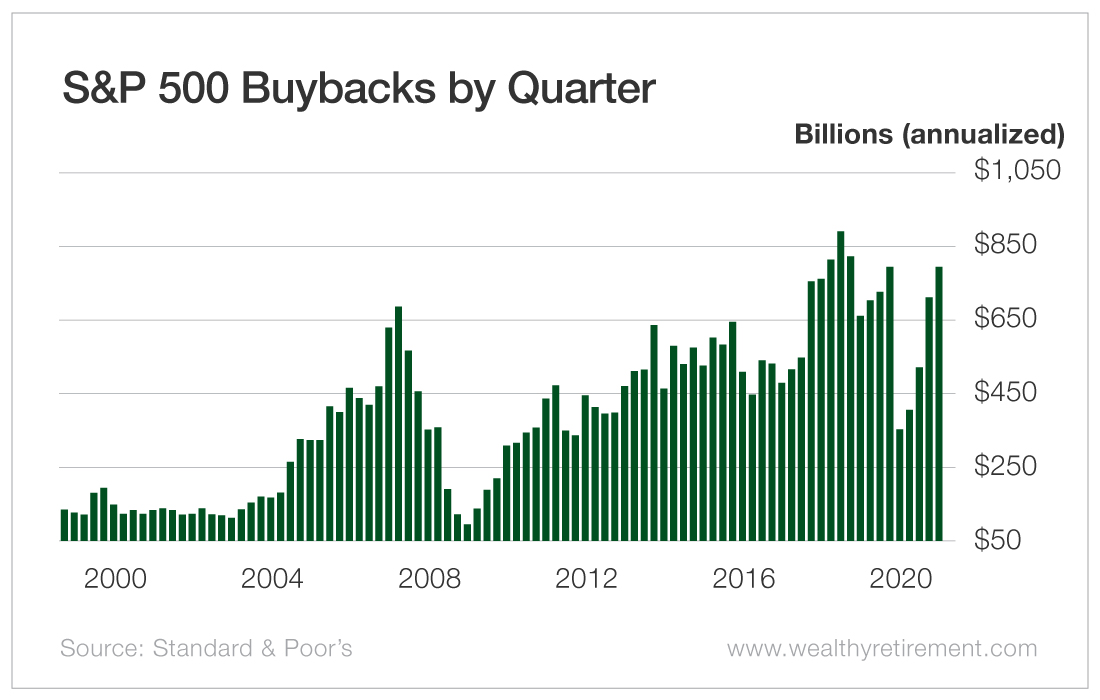 When the market tanked in 2008 and early 2009 and in early 2020, buybacks dried up. That’s precisely when companies should have been repurchasing their stock – when it was a bargain – instead of today with stocks at all-time highs.

When stocks crater, that’s the time for companies to repurchase shares – but that’s not what they do.

Because managements typically buy back shares at high prices, companies with buybacks have underperformed since 2009.

Professors Murali Jagannathan and Clifford P. Stephens of the University of Missouri and Michael S. Weisbach of the University of Arizona looked at an earlier period. They found that during the booms and busts of the 1980s and 1990s, repurchases increased during rising markets and fell during declines – the exact opposite of what you’d hope managements would do.

And in my book Get Rich with Dividends, I quoted a study by researchers Azi Ben-Rephael, Jacob Oded and Avi Wohl that showed managements of large companies do not buy back shares at lower-than-average market prices because large companies are “more interested in the disbursement of free cash.” In other words, they just want to show the market they are doing something with the cash instead of making repurchases that create shareholder value.

Since 1936, dividends have been responsible for roughly 40% of stocks’ total returns. Over the next decade, BofA Global Research expects that figure to increase.

That said, some people do find true love on Tinder. In the same vein, there are some companies that take their fiscal responsibility seriously and repurchase shares at opportune times when their stocks fall. But most companies buying back shares are simply slapping on a coat of makeup, putting on their most flattering outfit, and treating investors like Mr. and Ms. Right Now instead of Mr. and Ms. Right.