Drawn below is a graph depicting this triad.

The x-axis shows spending. The y-axis shows earning. The diagonal line shows where earnings are equal to spending. Those who are in debt have been spending more than they have been earning and thus they lie below the diagonal line. “Graduates” (young people) have low earnings but hopefully also low spending. At that point in life there is a tendency to spend as much as one earns since earnings are relatively low. The major group is what I for lack of a better word call the career track blogs. Here spending is 15% below earnings. This track is continued for 30-40 years as earnings and spending get progressively higher as a roughly constant margin for the retirement plan is retained. Since one particular blog shows a snapshot in time of a person’s finances, plotting all the bloggers at one time reflect the typical financial path taken by a person in our society. It looks like this. If there are any amateur astronomers reading this just think of the similarities to the typical evolution of a star on a Hertzsprung-Russell diagram. No, there is no hidden cosmic significance here 😉 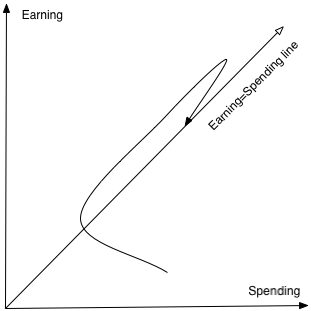 A person in this diagram may start in debt or at the spending=earning line. As earnings go up savings are gradually increased to 15% at which point they are held constant. As earnings keep going up spending is adjusted accordingly. After 30 or 40 years, the person retires with a modest drop in spending (no cafeteria lunch and no commute).This path is how most people think when it comes to personal finance. Other paths may sound strange or even impossible.Here are some other paths. That hopefully puts everything in perspective. 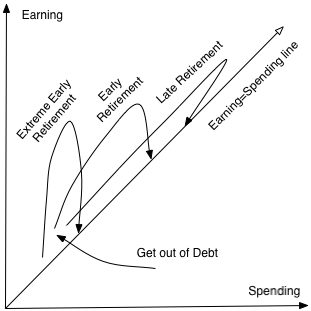 It is seen that the typical path above is just one of several possible path. The typical path corresponds to going into student debt, then getting a career for 30-40 years eventually paying off the debt and accumulating a large amount of money (ideally 1-2 million dollars in retirement funds) and then retiring at a high spending level which little concern for how the money is spent.Early retirement can be reached through perhaps modest student debts but saving substantially more at a rate of 30-50% for 15-20 years at which point early retirement is possible at age 40-50. This does require some budget control to carry through.Extreme early retirement is reachable with even smaller student debts (or perhaps no student debts) and saving 50-80% for 5-10 years. This makes it possible to retire between ages of 30 and 40. This requires substantial money management and frugality skills.The two conclusions to be drawn here is that by observing a large group of personal finance bloggers one can get an idea of how a person (a blogger to be exact) typically behaves over a lifetime. One the other hand one should also study “strange” blogs to see what other paths are possible.