Will REITs Crumble Because of Higher Interest Rates?

There are many investors who are worried that higher interest rates will lead to lower prices for real estate investment trusts (REITs). REITs have long been a favorite of income investors because of their strong dividend yields. But a solid dividend is meaningless if your stock falls.

Can REITs hold up in the face of higher rates? After all, higher rates raise their borrowing costs, and REITs borrow a lot of money in order to buy properties.

I believe REITS will be just fine. In fact, better than fine.

Many REITs have pricing power as inflation rises – meaning they can increase their prices along with inflation. For example, student housing REITs have a captive audience. For many students, there aren’t tons of options for where to live, especially if they want to be close to school.

Perhaps most importantly, the evidence doesn’t show that REITs act poorly when interest rates are climbing. Interestingly, they perform right in line with the S&P 500 ahead of interest rate hikes, when people are concerned about the effect of higher rates.

But once the rate hikes hit, REITs actually do quite well.

It’s a classic Wall Street reaction. Investors worry about some negative catalyst, and then when the catalyst actually hits, stocks rally. It’s like how stocks often run higher right after a war starts.

Looking at the interest rate hikes going back to 1994, we can see that REITs outperformed the S&P 500 in the following six months three out of four times. The average outperformance was 3.9%. That number would likely be higher if not for 1999, which led into the top of the dot-com bubble when investors were way more interested in buying tech stocks with no revenue instead of dividend-producing REITs. During that period, REITs underperformed by 17.7%.

Which REITs should you focus on?

I previously mentioned student housing. I believe that’s a great sector to be in. Along with student housing, self-storage and industrials are expected to have the most funds from operations (FFO) growth over the coming years. FFO is a form of cash flow used by REITs.

I’m also a fan of healthcare REITs, as demand for healthcare is only going to increase. It’s important to keep in mind that healthcare REITs do not operate healthcare facilities, like hospitals and nursing homes. They’re simply the landlords of those institutions.

Here are some examples of stocks in each REIT sector that I just mentioned, along with their current dividend yields. 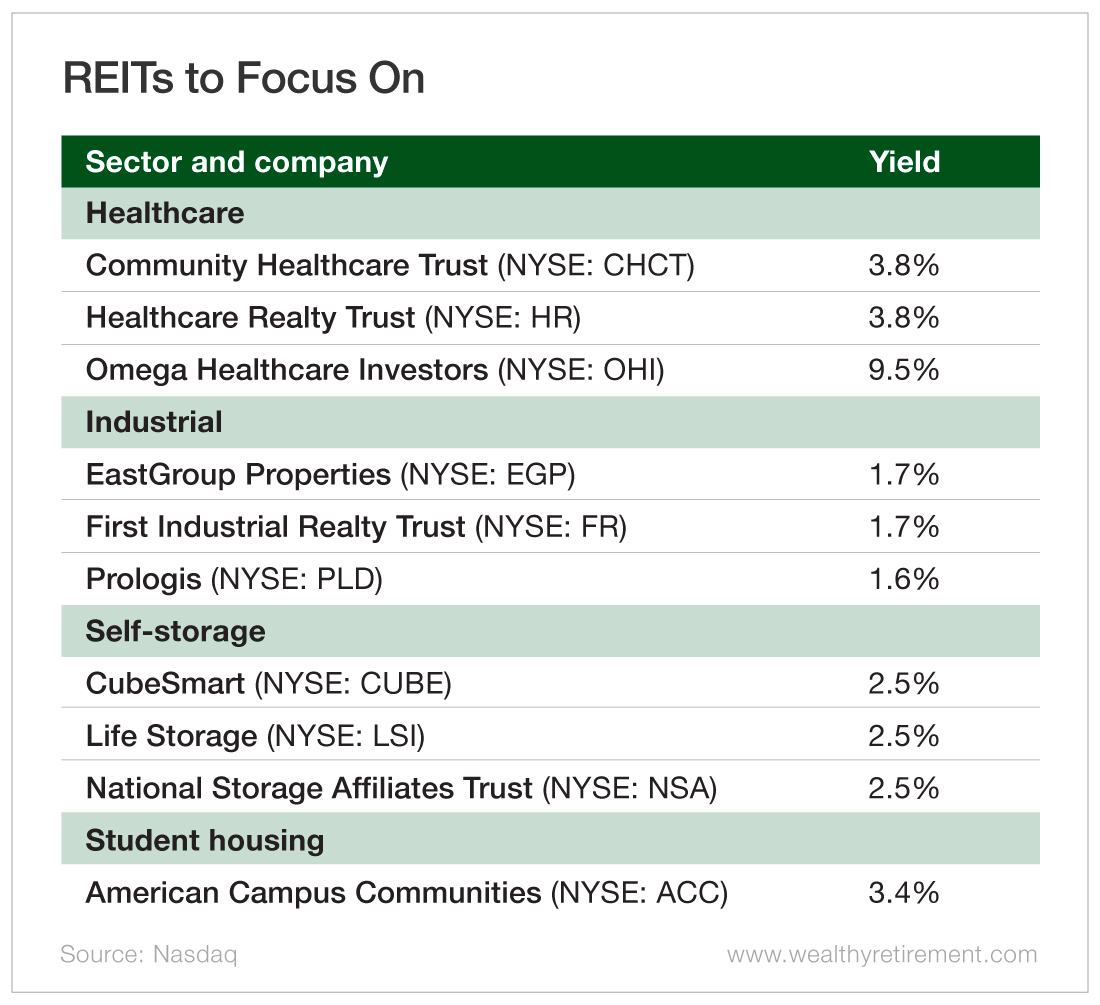 REITs belong in a diversified income portfolio, regardless of interest rates. As rates start to rise, you may hear chatter that exposure to interest rate-sensitive stocks like REITs should be reduced.

But the data does not show that. In fact, it shows just the opposite. If you don’t already own REITs, start exploring some and consider adding them to your portfolio in the near future.