Latest:
An Audit! What To Do if the IRS Contacts You Elderly Fall Prevention and Common Causes 10 Unconventional Ways to Save Money on The Heating Bill Cathie Wood’s Biggest Downfall

The annual inflation rate in the United States for the 12 months ending November 2021 was 6.8% – the highest reading in 40 years.

Around the world, the inflation situation is similarly grim.

As I’ve been saying for months, this inflation is not transitory and it means one thing…

Interest rates have to rise, potentially in a major way.

The last time inflation was this high in the United States, the rate on the U.S. 10-year Treasury was 9%, as compared with the minuscule 1.5% that we see today.

We’re looking at the biggest disconnect between inflation and interest rate policy in recorded history.

If inflation doesn’t slow quickly (and there’s no reason to believe it will), interest rates will go up.

Those rising rates will mean tough sledding for the S&P 500, which is currently dominated by megacap technology companies.

For the past five years, the biggest drivers of the S&P 500 have been the big technology companies – Microsoft (Nasdaq: MSFT), Apple (Nasdaq: AAPL), Amazon (Nasdaq: AMZN), Alphabet (Nasdaq: GOOGL) and Meta (Nasdaq: FB) – and now Tesla (Nasdaq: TSLA) too.

Together, these six companies make up an incredible 25% of the entire S&P 500.

With this kind of top-heavy concentration, these stocks are going to determine how well the S&P 500 performs.

That worries me as we head into what could become an enduring, and perhaps dramatic, rise in interest rates.

As I’ve previously explained, tech stocks and interest rates have an inverse relationship…

This is why these Big Tech stocks, after a long run of driving the S&P higher, are now set to be an anchor on the main American index.

U.K. Stocks Have Never Been This Cheap Relative to the S&P 500

The valuation gap between U.S. stocks and U.K. stocks is unprecedented. Trading at nearly 22 times earnings, the S&P 500 is now 80% more expensive than the British blue chip FTSE 100 Index. 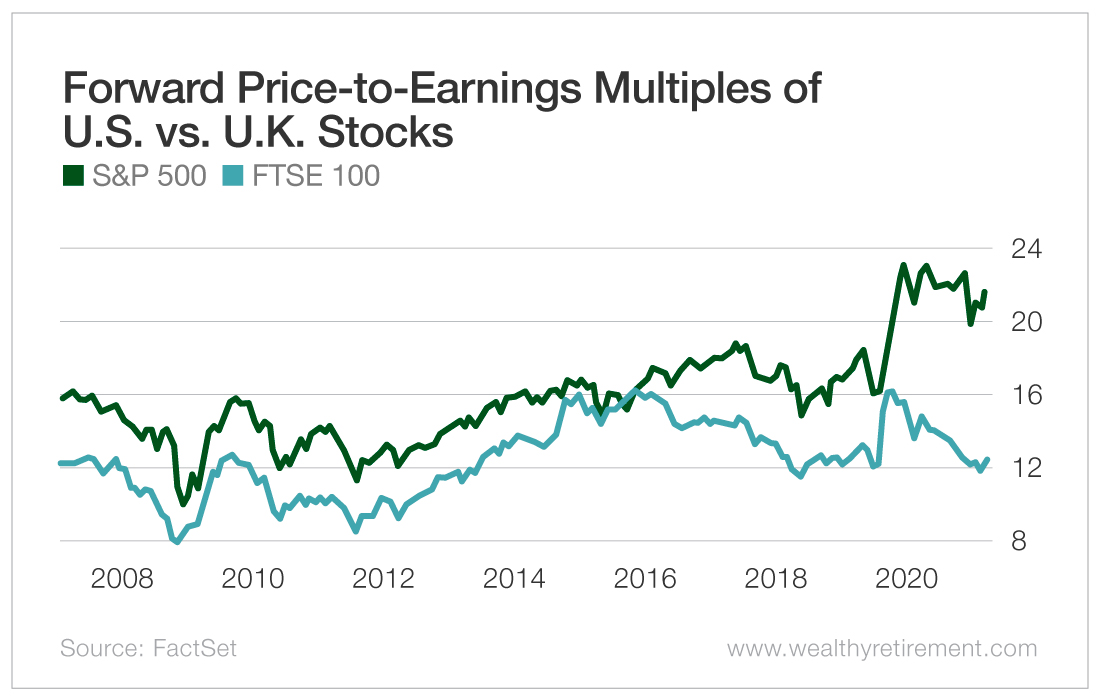 This valuation difference is one reason you should be more interested in U.K. stocks…

Another is that these companies making up the FTSE 100 will thrive in an environment of high inflation and rising interest rates.

Instead, the U.K. stock market is heavily weighted toward financials, consumer staples, materials, energy and healthcare.

These sectors flourish during periods of high inflation and rising rates.

The financial sector does well with rising rates because banks see their margins widen. Insurance companies earn more from their fixed-income portfolios.

Materials and energy producers benefit from rising commodity prices, which improve their revenues and cash flows.

The defensive consumer staples and healthcare sectors are inflation-resistant and will see increased investor interest because of it.

Getting exposure to the U.K. market is easy and can be done with the iShares MSCI United Kingdom ETF (NYSE: EWU).

You can view the sector breakdown of this exchange-traded fund (ETF) below. 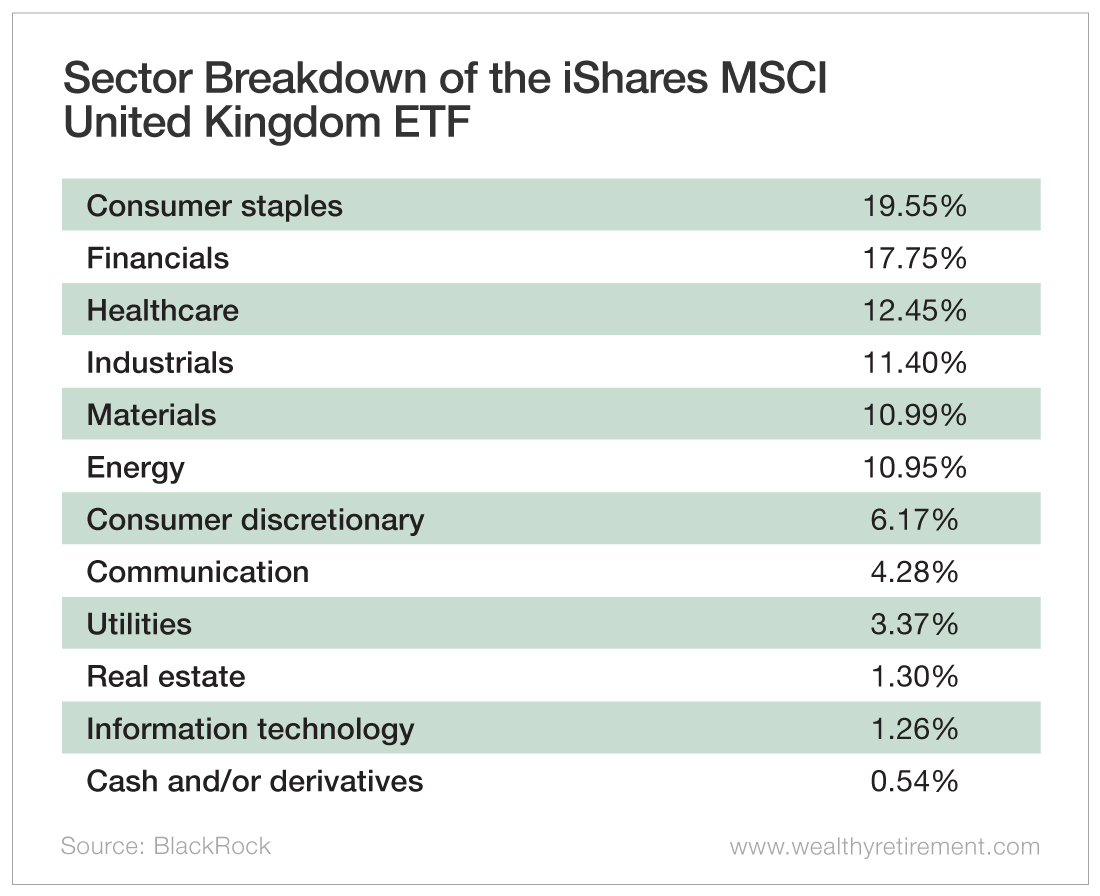 Keep this in mind as inflation climbs ever higher…

When Should You Itemize Deductions?