Artist Kevin Blythe Sampson recently spoke to SENIOR PLANET about his humble beginnings, what it meant to appear in the popular PBS Kids series, Arthur, and how COVID-19 has impacted his work. You can view Sampson’s work at the Cavin-Morris Gallery, Intuit, and the Mariposa Museum.

Is this a second career for you? If so can you describe your early career path, your first retirement, and your decision to enter the workforce again or pivot?

I’ve always wanted to be an artist. My father, Stephen Sampson, was one of New Jersey’s biggest civil rights leaders. So I grew up in a household surrounded by people like Ruby Deen, Ossie Davis, and many others. Congresswoman Shirley Chisholm was one of my father’s biggest mentors…she often had dinner at our home.

At 17, I went to Lincoln University where I stayed for two years. When I came back from college, My father was recruiting African-Americans to become police officers, and he said “You’re not sitting in my house just laying around.”  So I took the Police test  (I didn’t want to, I was more invested in becoming a Black Panther). But I became a Police Officer and the first uniformed African-American Police Composite Sketch Artist in the country. I remained a Police Officer for almost 20 years taking an early retirement after the death of my wife to raise my two children.

Can you describe the moment you knew “found object” art was something you wanted to specialize in? Why sculpture? Are there any other mediums you are exploring?

I have always drawn and painted. I decided I wanted to go back to school, so I went to Newark School of Fine & Industrial Art. One year in, they invited me to start teaching, and I would teach there for 18 years! I have been teaching for over 30 years now. For the past ten years, I have been a teaching artist with the Paul Robeson Gallery, at Rutgers University. 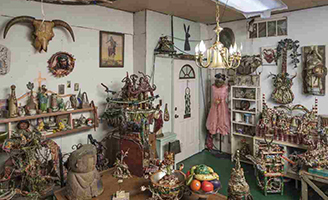 In the beginning, I was an illustrator.  I actually wanted to illustrate record album covers. I started creating found object art due to a series of losses—one of my favorite cousins contracted AIDS. After she died her mother gave me all of her Santeria objects and I took those and started making my first sculpture. I didn’t know that I was making a sculpture, I just wanted to make a piece that would accompany her on her journey to the other side. The AIDS and crack crisis was in full bloom. There were so many people dying around me that I started making a series of memorials with found objects. (His studio pictured above, at right.)

A short time later I would lose both a child and my wife Pamela. I just kept making these memorials as a way to heal myself. Found objects grew out of my healing process.

Describe your art-making process. How long would you say a piece takes? Do you have a favorite piece? Is there another artist that inspires you?

Most of my pieces take a couple of months; once I start I can’t stop. My favorite pieces are still some of my earliest work. They are pieces about my wife and my cousin, Carroll. These are pieces that I’ll never get rid of (I call them my “power pieces”). When you collect found objects you’re using materials that someone else touched. I like to think they are magical objects, holding the power of the previous owners, with the ability to tell their stories.

How did your work come to be at Cavin-Morris Gallery? Do you feel it’s important for artists to have their work exhibited in gallery spaces? Has COVID changed the significance of the gallery?

I’ve been represented by Cavin-Morris Gallery since 1994. After I started teaching at Newark School of Fine Arts, I made five batches of slides of my work and dropped them off at five galleries in NY. I ended up hearing back from two major galleries.

The owners of Cavin-Morris Gallery have become some of my best friends. They are some of my greatest mentors. I’ve been with them because I trust them and their love of art. There’s not a lot of trust in the art world. COVID has changed how the gallery system works because everything’s online now.

In March of 2021, your episode of the PBS show ‘Arthur’, “George Scraps His Sculpture,” premiered on televisions and devices around the country. What did it feel like to see yourself and art represented on such a national level? Do you feel that this type of exposure is beneficial to artists?

I still don’t fully believe it, what an honor. It took almost two years to produce and complete the segment. It’s one of the highlights of my life because I could have never conceived being in a cartoon. I went to Big Yellow Duck in New York to do the voiceover. The best part was my granddaughter’s reaction. When they first sent me the workup of what I would look like, I sent it to my daughter Lauren and she showed it to my granddaughter, Nora, who said “that’s papa”. So I knew it was good.

Just knowing that Nora has me on file, and can look at ‘papa’ twenty years from now, hear my voice, and see me…

There’s such beauty to aging.

How has COVID-19 impacted your work? What motivates you to keep doing this work? And where do you see yourself in three years?

When COVID started, I couldn’t collect materials for sculptures so I returned to painting. Since then I’ve completed almost 100 paintings. A lot of artists make art because they want to, I make work because I have to. I don’t feel well if I’m not making art.

What does ‘aging with attitude’ mean to you?

There’s such beauty to aging.

It’s taken me 67 years to say everything that’s on my mind. The beauty about aging is you don’t have to hold back anymore. I like aging because for the first time in my life, I’m calm and I have been able to discard many of the trappings of youth.

Photos: Top and bottom: The artist with his “The USS Mr. Imagination,” a work named after a dear friend, Chicago Icon: who had recently passed away:  Mr. Imagination (March 30, 1948 in Maywood, Illinois – May 30, 2012). Photographer Jeffrey Machtig Courtesy of the John Micheal Kohler Art Center. www.jmkac.org

This article was originally published by Seniorplanet.org. Read the original article here.
Previous Post YouTuber Thursday ep. 3 – Top 5 in Thong Lor and Don Don Donki
Next Post Disciplined Investors Use Fear and Greed to Their Advantage