Play the Coming Rebound in the Biotech Sector

As a contrarian, I love nothing more than seeing an entire sector of stocks fall deeply out of favor.

When sellers overwhelm buyers, fundamentals are forgotten and stocks can become incredibly mispriced.

Today, my contrarian focus is locked in on the biotech sector.

In 2021, the SPDR S&P Biotech ETF (NYSE: XBI), an exchange-traded fund (ETF), dropped 35% from its February peak through the end of the year.

After that dismal performance, many folks thought that 2022 would be a rebound year for biotech stocks.

Instead, the sell-off has intensified. The SPDR S&P Biotech ETF has already dropped another 20% this year.

All in all, the equal-weighted ETF has been cut in half since it peaked almost exactly one year ago today. 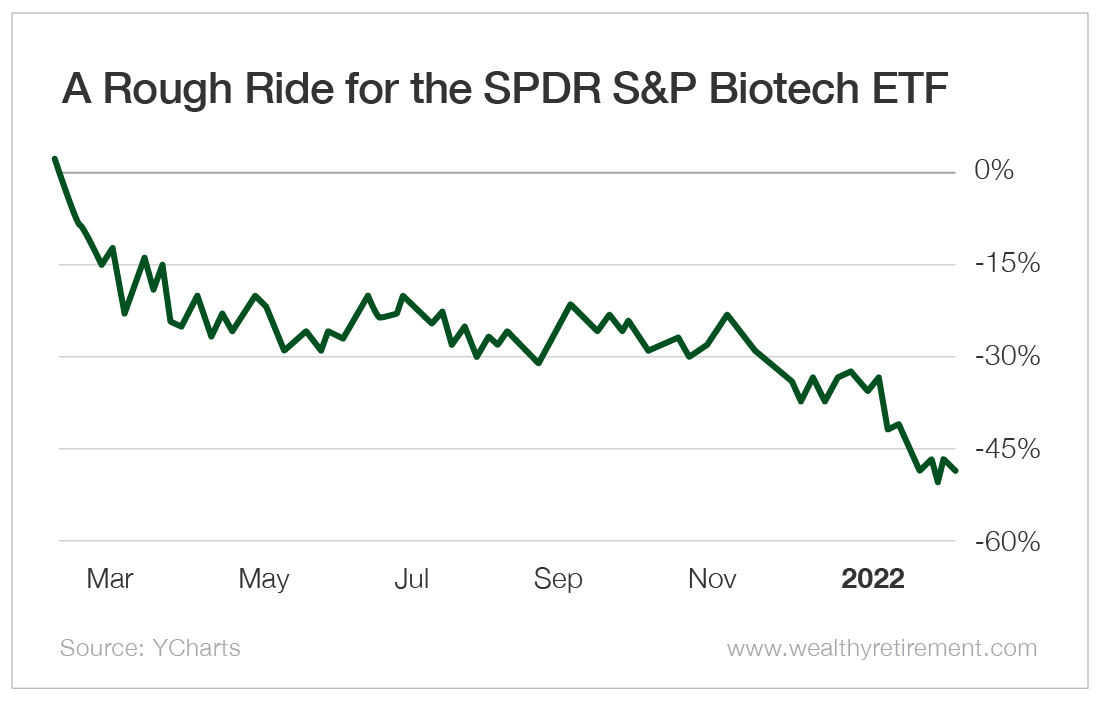 Talk about a chart only a contrarian could love!

Remember, after a 50% decline, a security needs to increase 100% to get back to where it started.

Even if that takes five to seven years, investors buying today in advance of the recovery would be well rewarded.

So… why have biotech stocks been beaten down so relentlessly?

I think there are two fundamental reasons.

The first reason is there’s uncertainty as to whether the Biden administration will be tougher on pharmaceutical mergers.

Last summer, President Biden released an executive order that detailed how he planned to promote competition as a way to lower prices, and it named regulation of the healthcare and pharmaceutical industries as a specific objective.

That’s why Biden wants to limit takeovers in this sector.

This is concerning for hedge funds and other investors exposed to biotech. After all, getting acquired by Big Pharma is viewed as the main value-realizing catalyst for biotech companies.

The second reason biotech stocks have been demolished is momentum.

This sector is notorious for volatility and overshooting in both directions.

And with much of the trading in the market now driven by computer algorithms that don’t consider company fundamentals, momentum means more than ever.

What started the momentum in the wrong direction?

In early 2021, valuations in the biotech sector were getting frothy.

Due to excitement over vaccines, from the COVID-19 bottom in March 2020, the SPDR S&P Biotech ETF rocketed higher by 134% in less than a year. 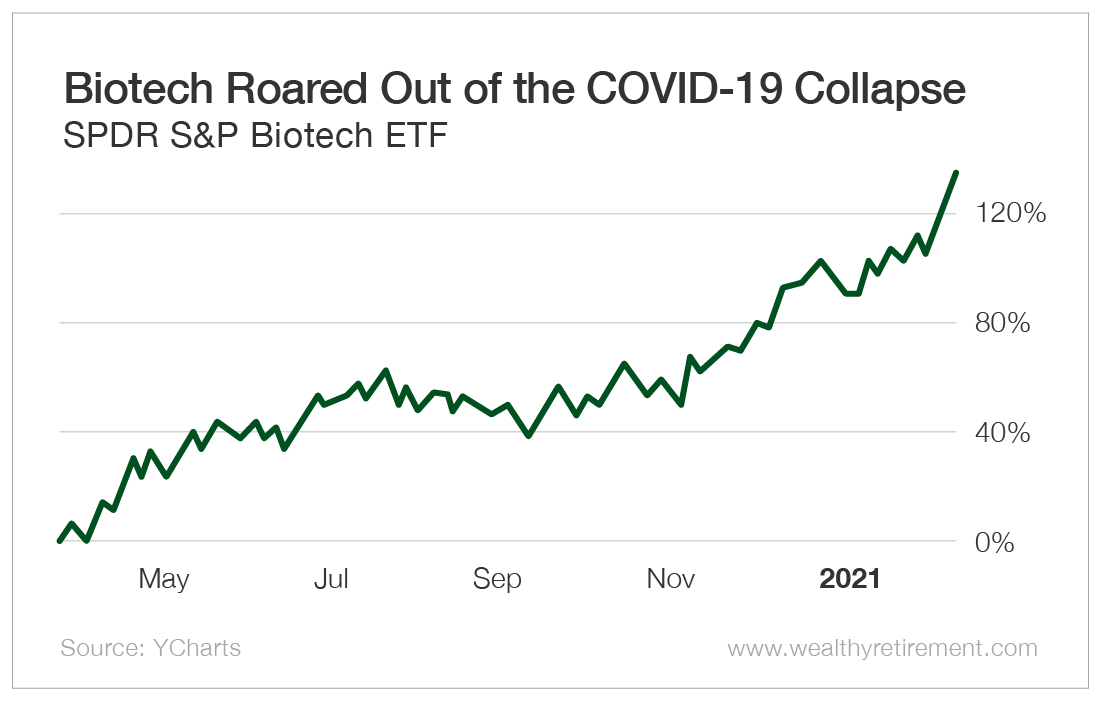 Therefore, a correction after a furious rally like that made sense.

But what rose too far, too fast in the first place now has fallen too far in the opposite direction.

The SPDR S&P Biotech ETF is now trading at the exact same level that it was a full five years ago. 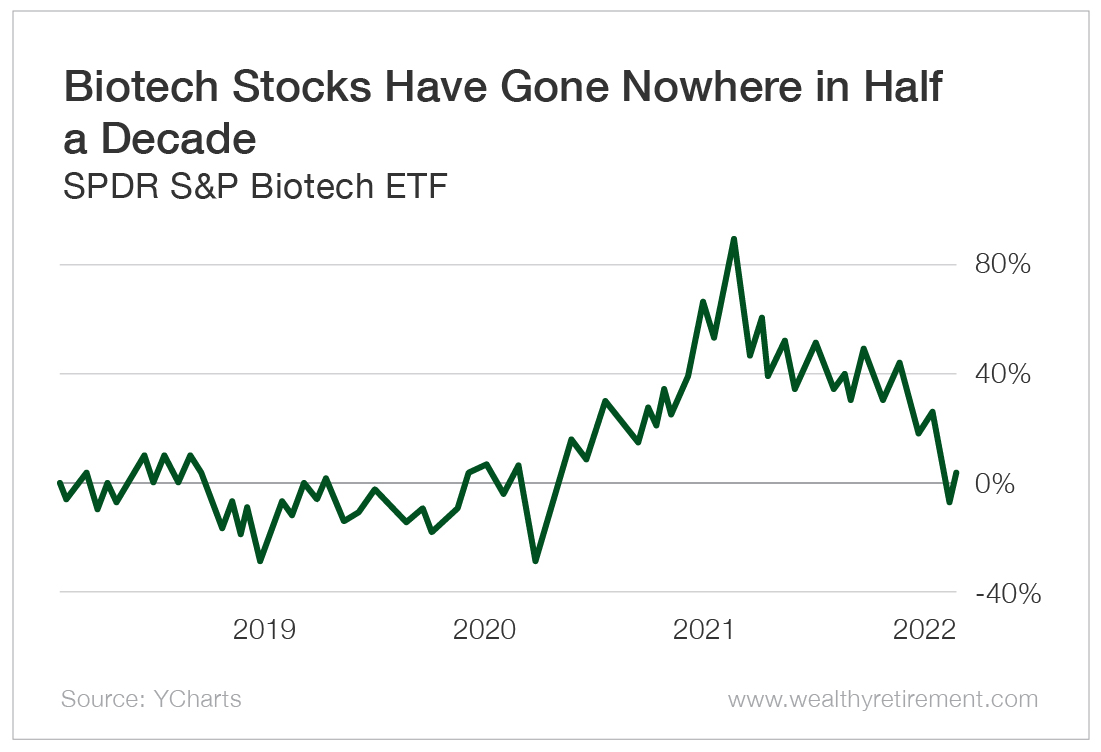 With the SPDR S&P Biotech ETF down to where it was a full five years ago, the value proposition in this sector has become intriguing.

A Prime Entry Point for Biotech

The SPDR S&P Biotech ETF is a fund of 189 different biotech companies.

It is equal weighted, which means each stock in the fund represents a similar percentage of the ETF.

Equal-weighted ETFs are different from market-capitalization-weighted ETFs, in which the position weightings are matched to the size of the company.

Equal-weighted ETFs are therefore much more diversified than market-capitalization-weighted ETFs, which are top-heavy toward the bigger companies.

More specifically, the SPDR S&P Biotech ETF is spread evenly between companies with market valuations as high as $250 billion and as low as $180 million.

I like getting exposure to those smaller, faster-growing businesses, especially now that the smallest companies are the most undervalued.

After the sudden decline to start 2022, the SPDR S&P Biotech ETF appears to be trading at attractive valuation multiples, including a forward price-to-earnings ratio of 9.6, a price-to-cash flow ratio of 11.8 and an estimated three-to-five-year earnings per share growth rate of 15.33%.

Those are some incredibly cheap valuations relative to the average rate that the companies in the portfolio are expected to grow.

To top it off, valuations have declined so much that there are now more than 100 biotech companies that are trading for less than the cash that they have in the bank.

That’s a clear sign that now is the time to be looking in this sector.

For historical reference of the rebound potential here, we can consider the last time the SPDR S&P Biotech ETF suffered a 50% decline.

That was in 2015, when then-presidential front-runner Hillary Clinton included curbing drugmaker price gouging on her agenda.

After that 50% drop that ended in February 2016, the SPDR S&P Biotech ETF promptly doubled within two years.

I don’t know whether biotech stocks are currently at a bottom, but I suspect we are close to it.

More importantly, when this sector does turn, it should be set up for a long-term stretch of outperformance.

From this price point, long-term investors will do well with the SPDR S&P Biotech ETF.

This article was originally published by Wealthyretirement.com. Read the original article here.
Previous Post 3 Mental Blocks Preventing Your Secure Retirement
Next Post What to Do About Inflation? How Are People Adjusting Retirement Plans in the Face of Rising Costs?