Expect a BIG Change From Berkshire Hathaway in 2022

In November 2020, I wrote about the ultimate insider trading tip.

For the first time in the 50-plus year history of Berkshire Hathaway (NYSE: BRK-A), CEO Warren Buffett was aggressively repurchasing shares of his own company.

I called it a table-pounding buy signal.

For the first time on such a large scale, the greatest stock market investor in history was buying billions of dollars’ worth of stock in his own company, which he knows better than anyone else on the planet.

What better buy signal could you ask for as an investor?

Buffett hand-delivered this investment idea to us. Naturally, it’s worked out incredibly well. 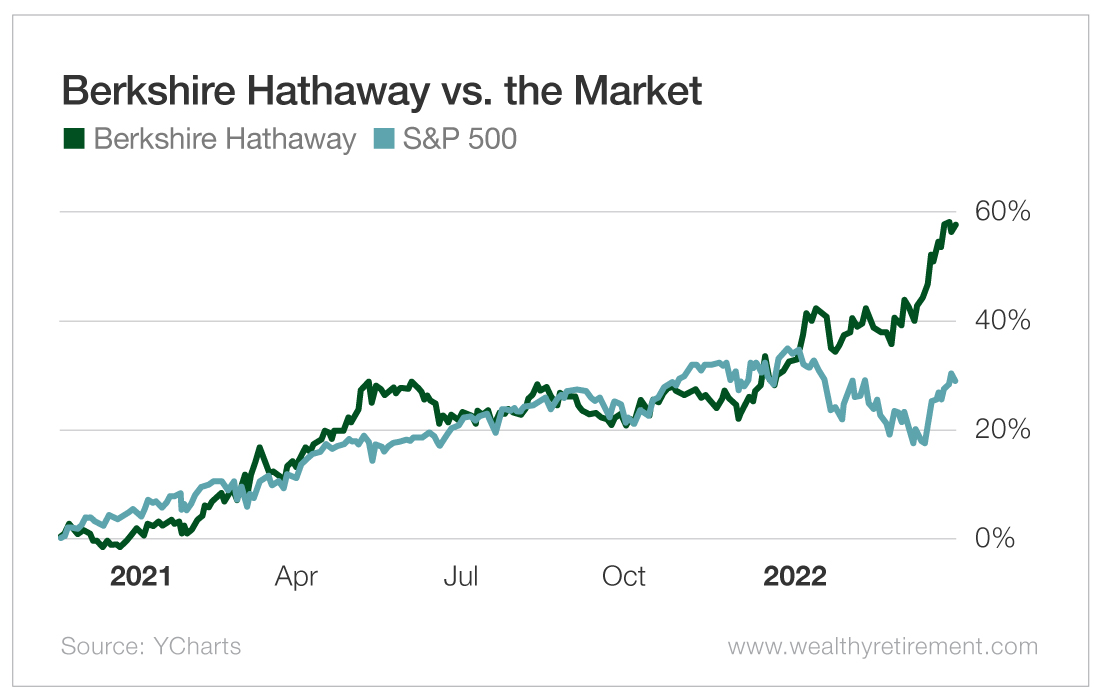 Since November 2020, Berkshire Hathaway is up 57%, almost double the return of the S&P 500 over the same period.

Berkshire Hathaway is one of the safest, most conservatively run companies on the planet, and we were able to smash the market with its stock.

And as has often happened, Berkshire Hathaway has done exceptionally well during the much more difficult market conditions that we have had so far during 2022.

The market has seen a “flight to quality,” as they say.

Since Buffett ramped up his repurchases of Berkshire during 2020, he has continued to aggressively buy back stock.

After repurchasing $24 billion worth of Berkshire stock in 2020, Buffett followed that up with another $27 billion worth in 2021. 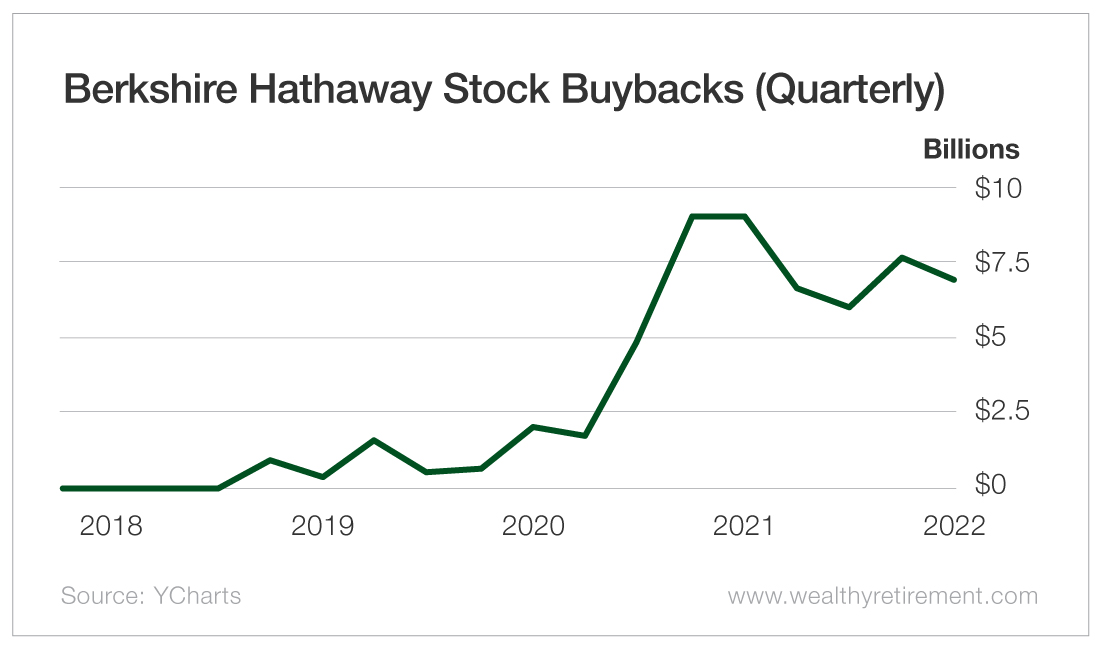 Interestingly, Buffett spent only $8 billion on buying shares of other publicly traded companies in 2021.

He actually sold $16 billion worth of other stocks in 2021, thereby making him a net seller in the market for the second year in a row. The term net seller refers to an investor or institution that has sold more than it has purchased in any given period.

Buffett has clearly been incredibly bullish on Berkshire for two years, but he has been rather bearish on the other publicly traded stocks available in the market.

Expect a Change From Buffett in 2022

This year, things are changing.

Buffett has already purchased more than $7 billion worth of the shares of Occidental Petroleum (NYSE: OXY).

That basically equates to his total stock market purchases of 2021, and we are only a couple of months into the year.

On top of that, Buffett also announced that Berkshire Hathaway will spend $11.6 billion to acquire 100% of the insurance company Alleghany Corp. (NYSE: Y).

Suddenly, after several years of seeing little value outside of the shares of his own company, Buffett has sprung back to life in the public market!

I can’t wait to take a look at Berkshire Hathaway’s full regulatory filing for the first quarter of 2022 to see what else Buffett may have been buying. Berkshire came into the year with almost $150 billion in dry powder, so Buffett certainly has the means to pounce on any and all opportunities that he spots.

However, one stock that Buffett might buy little or none of in 2022 is Berkshire Hathaway.

A value investor like Buffett will realize that the value proposition for Berkshire Hathaway has changed.

Most of Buffett’s repurchases of Berkshire Hathaway have taken place when Berkshire was trading around 1.25 times book value.

With the strong start to 2022 for Berkshire’s share price, the company is now trading at 1.56 times book value. Historically, Buffett has not been a repurchaser of Berkshire shares at that valuation. 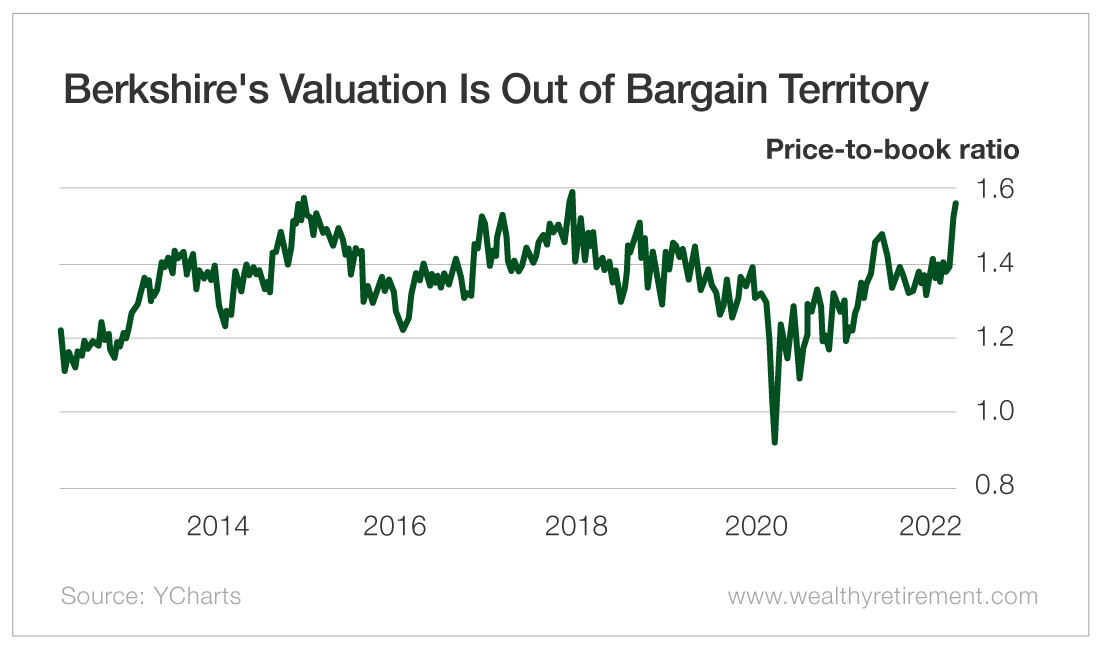 Personally, I think that’s the correct move, as the company is now getting close to fairly valued.

We’ve had a great ride on Berkshire Hathaway thanks to Buffett’s 2020 stock tip that we took advantage of.

At this point, I wouldn’t be a buyer of Berkshire Hathaway.

If the stock drops close to that 1.25 times book value mark again, I’ll be sounding the buy signal for Berkshire Hathaway once more.

This article was originally published by Wealthyretirement.com. Read the original article here.
Previous Post March 2022 Early Retirement Update
Next Post How to Save on Your Taxes and Other Last-Minute Tax Tips