Buybacks Are Making a Comeback

Editor’s Note: As Senior Markets Expert Matt Benjamin points out in today’s article, politicians want to ban one of the greatest moneymaking strategies ever.

That is precisely why Chief Investment Strategist Alexander Green recently went LIVE with longtime Oxford Club Member Bill O’Reilly to show exactly how you can take advantage of this investment approach and “stick it to the man.”

Alex discovered certain events that can deliver more money, in a shorter period of time, than virtually any other strategy. These events can lead to long-term wins as big as 7,500% over 15 years…

Yet Sen. Elizabeth Warren has railed against them on television… Sen. Bernie Sanders has called them “an enormous problem”… and Sen. Tammy Baldwin thinks they should be illegal!

But if you look at the facts instead of politically biased opinions, you’ll find their message is flatly untrue.

If you missed the event with Alex and Bill, don’t fret. You can watch the broadcast HERE.

But hurry! Alex and Bill go after several politicians. Who knows how long this broadcast will remain available…

Announcements of stock buybacks – when companies use cash on hand to repurchase their own shares on the open market – exceeded $300 billion in the first quarter for U.S. companies.

And buybacks will reach a record $1 trillion this year, Goldman Sachs estimates. You can see this astonishing growth in the chart below. 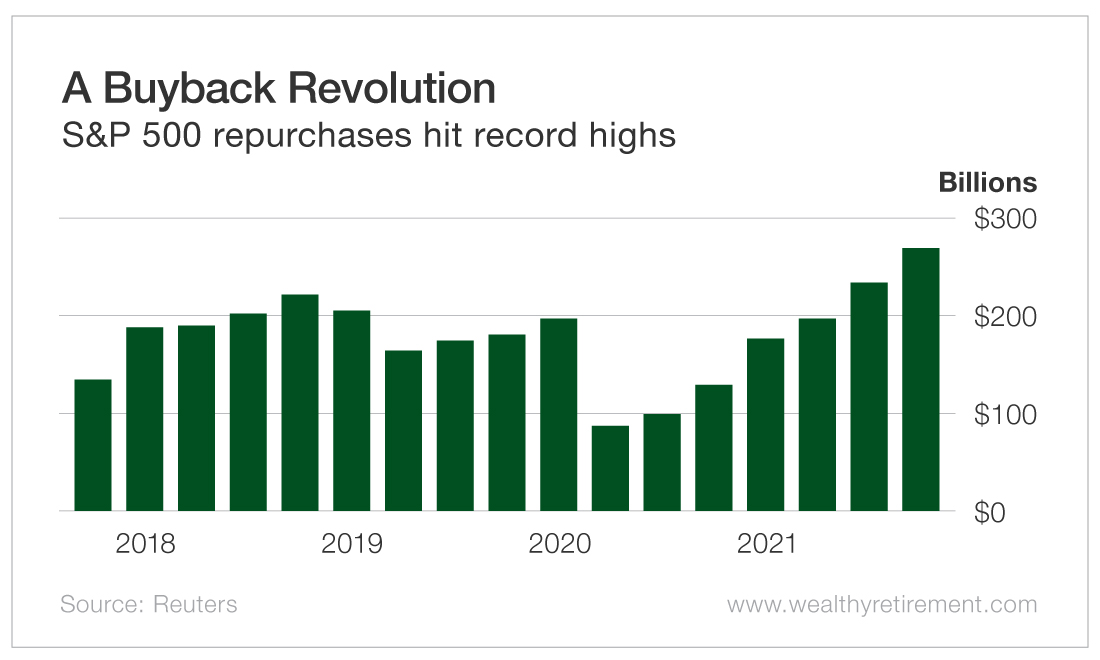 Buybacks are generally good for shareholders. They boost demand for a company’s stock and reduce the number of outstanding shares. Both can push the share price up.

And with fewer shares on the market, earnings per share – a key metric investors use to value a stock – rise. That too can boost the share price.

Of course, the rising tide of buybacks will also bring renewed opposition to them.

Some politicians claim that buybacks are greedy and nefarious. In fact, several have been riding this hobby horse for a few years now.

Back in 2019, Senate Majority Leader Chuck Schumer and Sen. Bernie Sanders penned an op-ed in The New York Times in which they portrayed buybacks as “corporate self-indulgence” and “an enormous problem for workers.”

Under the legislation, companies would have to prove they first boosted employees’ pay, pensions and benefits. Only then could they use remaining cash for buybacks.

While those seem like worthy things to spend money on, one study of the bill found that only a handful of U.S. companies could meet the Schumer-Sanders criteria for a buyback.

And so it seems this legislation was really designed to eliminate buybacks, not improve employee pay and benefits.

Yet research by the Harvard Business Review found that buybacks don’t deprive companies of cash they would otherwise invest in employees and new equipment, stating…

Employees of S&P 500 firms are unlikely to be systematically hurt by either dividends or buybacks… There is little evidence that buybacks and dividends by the S&P 500 are hurting the economy by depriving firms of capital they would otherwise use for investment and paying workers.

Let me note that the Harvard Business Review is hardly a bastion of right-wing propaganda. In fact, it’s considered to be politically left of center.

Finally, Schumer and Sanders repeat the old yarn that only rich people own stocks, so buybacks will benefit them at the expense of the unwealthy and increase economic inequality.

This is demonstrably false.

Middle- and working-class Americans may not do a lot of day trading. But they do own an enormous amount of stock through pension and retirement accounts.

According to the Tax Foundation, as of 2017, public funds like those that benefit teachers and police officers held 41% of the assets in the top 1,000 retirement funds.

These funds – and the ordinary people who invest in them – are some of the largest beneficiaries of stock buybacks.

Fortunately, the Schumer-Sanders bill has gone nowhere… yet.

But I expect the chorus of opposition to buybacks will grow louder this year.

There is one prominent Democrat who doesn’t dislike stock buybacks at all.

In fact, he loves them.

He’s called buybacks “the best use of a company’s capital” when the stock is priced below its true value.

Buffett is a big fan of companies – Apple (Nasdaq: AAPL) is one of his favorites – that routinely repurchase their own shares.

In fact, Berkshire recently purchased another $600 million worth of Apple shares, making it the tech giant’s largest shareholder, with a 5.4% stake.

“Anytime you can buy stock for less than it’s worth, it’s advantageous to the continuing shareholders,” he told shareholders at Berkshire’s 2016 annual meeting.

As usual, Buffett is right.

Over the long term, companies that repurchase their shares have outperformed their benchmark indexes, according to Dow Jones. These include large cap, midcap and small cap firms.

And those companies’ performances were better in down markets than in up markets, which is particularly relevant right now.

Finally, a buyback announcement sends a signal that a company is flush with cash, has a strong balance sheet and is optimistic about its future.

So as companies continue to buy back shares this year, watch closely. They could be telling you something very important.