During the COVID-19 crash, I pounded the table about the banking sector -specifically, the SPDR S&P Bank ETF (NYSE: KBE).

Seeing as American banks had historically strong balance sheets and rock-bottom valuations at the time, this ETF presented an exceptional opportunity.

The trade worked out great. 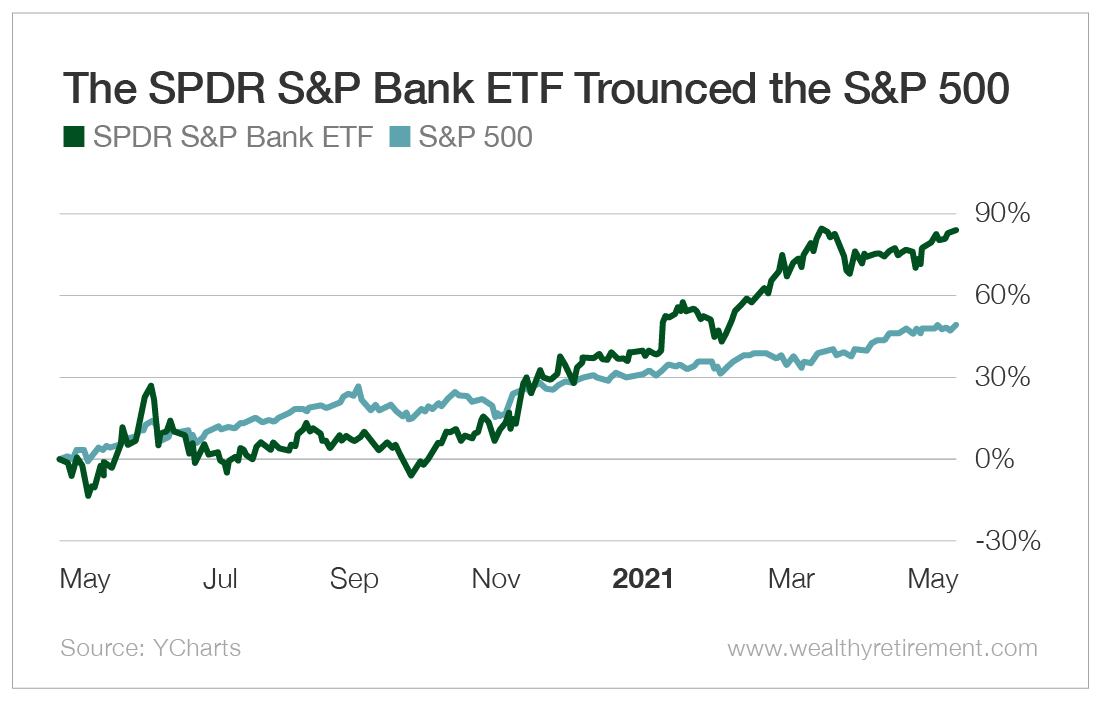 At the end of last year, I was pounding the table again, this time believing interest rates were on the verge of skyrocketing. And boy, have they ever! Last year, the 2-year Treasury yielded next to nothing Today, it yields well over 4% and is still moving higher.

So where does the SPDR S&P Bank ETF stand now? As a reminder, the banking sector’s profits will benefit from these big rates increases.

If we look back, we can see that prior to the 2008 global financial crisis, NIMs for U.S. banks typically hovered in the 3.5% to 4% range.

In recent years, those margins have been compressed to well under 3%, which has put a nasty crimp on profitability. 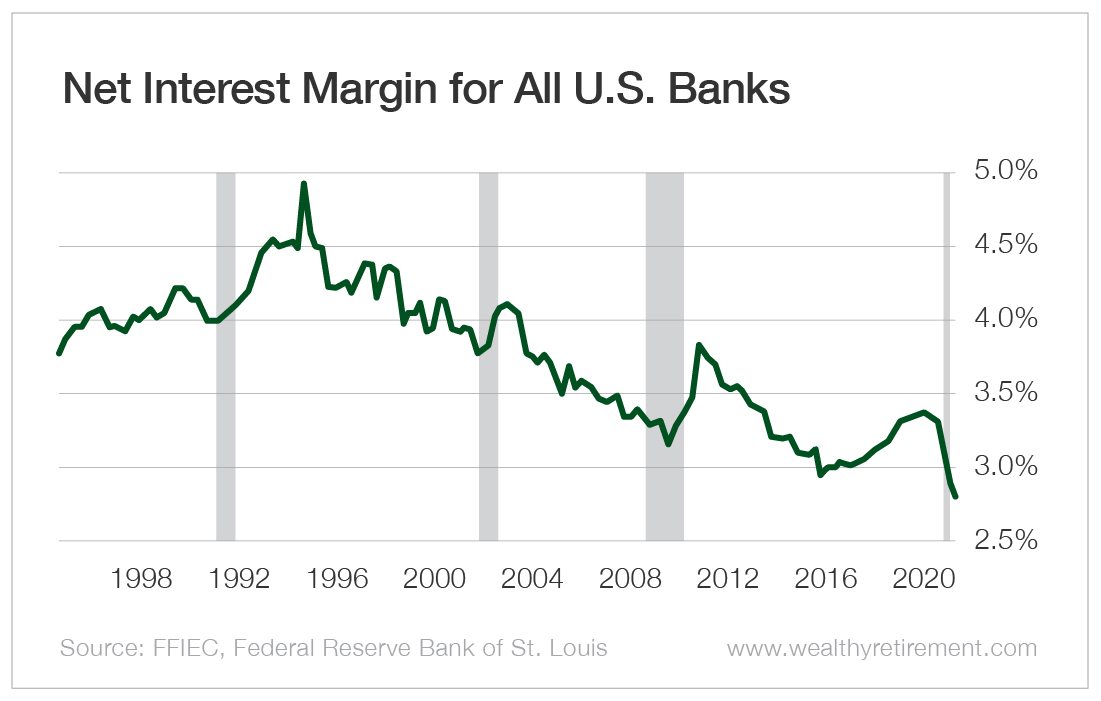 Considering banks have balance sheets with total interest-earning assets in the tens or hundreds of billions of dollars, the difference in bank profits from even a small change in NIMs would be huge.

Despite widening NIMs, the banking sector has been caught in the stock market downdrift this year along with everything else. 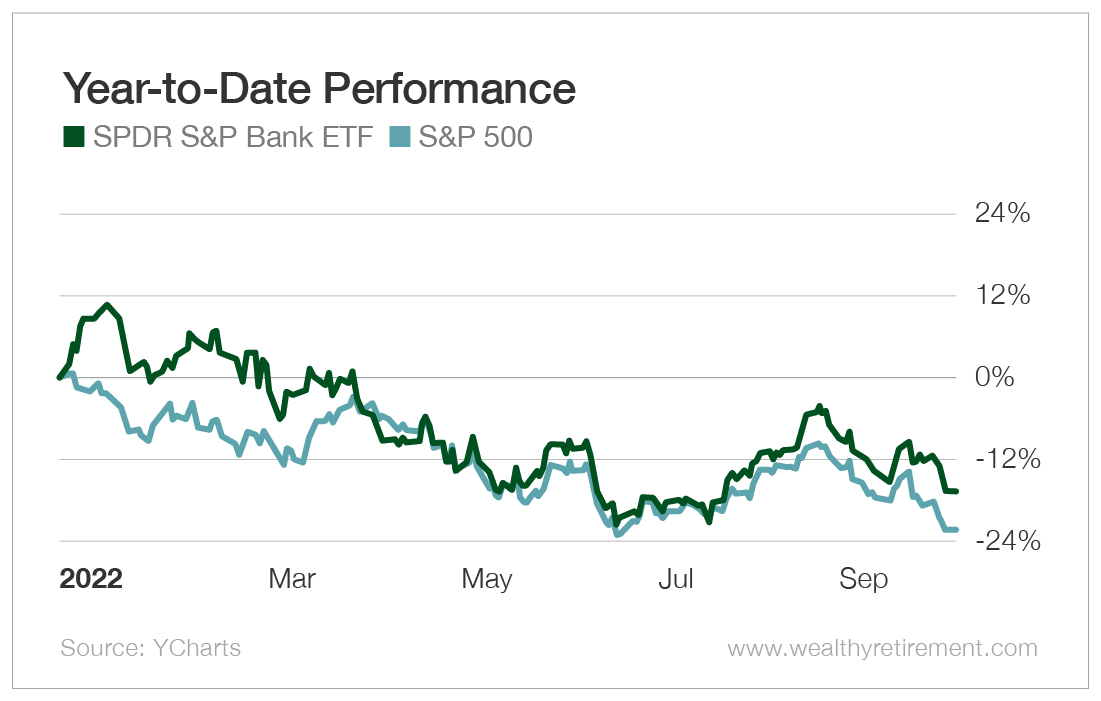 Does that drop mean we should avoid the SPDR S&P Bank ETF?

I think the market is really missing the most important point here.

NIMs, after being crushed by Federal Reserve zero interest rate policy, are now heading back toward normality.

The banking sector’s earnings prospects for the next few years have not worsened this year. They have improved.

Yes, the economy is going to struggle because of higher rates. But the banking sector still has the pristine balance sheets and strong capital positions to handle that.

The increase in profits from widening NIMs will far outpace any deterioration in loan performance.

Taking a deeper look at the S&P Bank ETF itself, the fundamental valuation metrics of the 100 stocks it holds are compelling.

On average, these holdings trade at 8.9 times this year’s earnings and 1.11 times book value and have an estimated five-year earnings growth rate of 7.66%.

I like a single-digit price-to-earnings ratio heading into an era when NIMs will finally revert to normal – and much more profitable – levels.

Because of this, the Value Meter rates the SPDR S&P Bank ETF (NYSE: KBE) as “Slightly Undervalued” today and suggests it offers a solid risk-reward profile.

The banking sector has been good to us before here at Wealthy Retirement.

Based on where banks are trading today, I believe it will be good to us again.

If you have a stock whose valuation you’d like me to grade, leave the ticker in the comments section.

You can also check to see whether I’ve written about your favorite stock recently. Just click on the magnifying glass on the upper right part of the Wealthy Retirement homepage, type in the ticker symbol and hit enter.

This article was originally published by Wealthyretirement.com. Read the original article here.
Previous Post Worried About the Markets? Run Bear Market Scenarios with the Planner
Next Post The Ultimate Guide to the Best Places to Retire: 26 Lists, Quizzes, and Tips for Making the Best Relocation Decision for You

How to Protect Yourself Against Inflation Today

Years ago, a friend of mine asked me for a stock recommendation or two. “I need to make some…