Time to Bet Against Buffett?

Warren Buffett’s incredible 70 years of stock market success has been built by taking big positions in businesses that have powerful brands.

But his latest $60 billion investment is the exact opposite of this.

These are companies that have brand strength protecting them against competition, pricing power and a very low level of annual capital spending requirements.

In other words, they’re cash-gushing businesses with competitive moats.

Given that this has long been Buffett’s clear recipe for astounding success, what he’s done this year has been rather shocking.

The Oracle of Omaha has placed a jaw-dropping $60 billion bet on two oil and gas producers.

With 165 million shares and a current market value of $30 billion, the oil and gas major Chevron (NYSE: CVX) represents half that bet.

As a company that sells a homogenous, undifferentiated commodity, Chevron has exactly none of the usual attributes that are the hallmarks of a classic Buffett investment.

Chevron has no brand strength.

Nobody cares whether they are buying oil that was produced by Chevron versus oil produced by Exxon Mobil.

Chevron has no pricing power.

Quite the opposite, in fact. The price at which Chevron sells the oil and natural gas it produces is set by the market and is extremely volatile.

And Chevron doesn’t even have low annual capital spending requirements.

Instead, the company has to spend billions upon billions of dollars each and every year on infrastructure and drilling just to replace declines in existing production.

So if it isn’t the quality of the business that has attracted Buffett, then what is it?

The only reasonable conclusion is that Buffett has a very bullish view on oil prices for the next decade.

You simply can’t invest $60 billion into two oil producers unless you have a very clear opinion on the price at which they are going to be selling that commodity.

Currently, U.S. and global oil trades for roughly $90 per barrel as of this writing. Based on what Chevron earns selling oil at this price, the company trades at a market value-to-EBITDA (earnings before interest, taxes, depreciation and amortization) ratio of 5.8.

That doesn’t look expensive against the 10-year median enterprise value-to-EBITDA of 6.36 that Chevron has traded at… but it doesn’t look incredibly cheap either.

But again, what matters is what happens to the price of oil.

If the price of oil goes up from here, Chevron’s EBITDA is going to rise and the stock today will be cheap.

If the price of oil goes down, buying Chevron today is probably going to look expensive.

And if the price of oil stays where it is, I would say the current trading price for Chevron is going to look about right.

Clearly, by continuing to load up on Chevron, Buffett thinks oil is going higher. I would love to hear his thoughts on the commodity, but he really hasn’t said much publicly.

Given that oil is already at $90 per barrel – which is rather high historically – I’m surprised that he continues to add to his Chevron position.

Typically, the time to buy oil producers is when everyone has given up on the commodity. That’s why on November 10, 2020, I wrote that the oil sector presented what could be the opportunity of a lifetime. 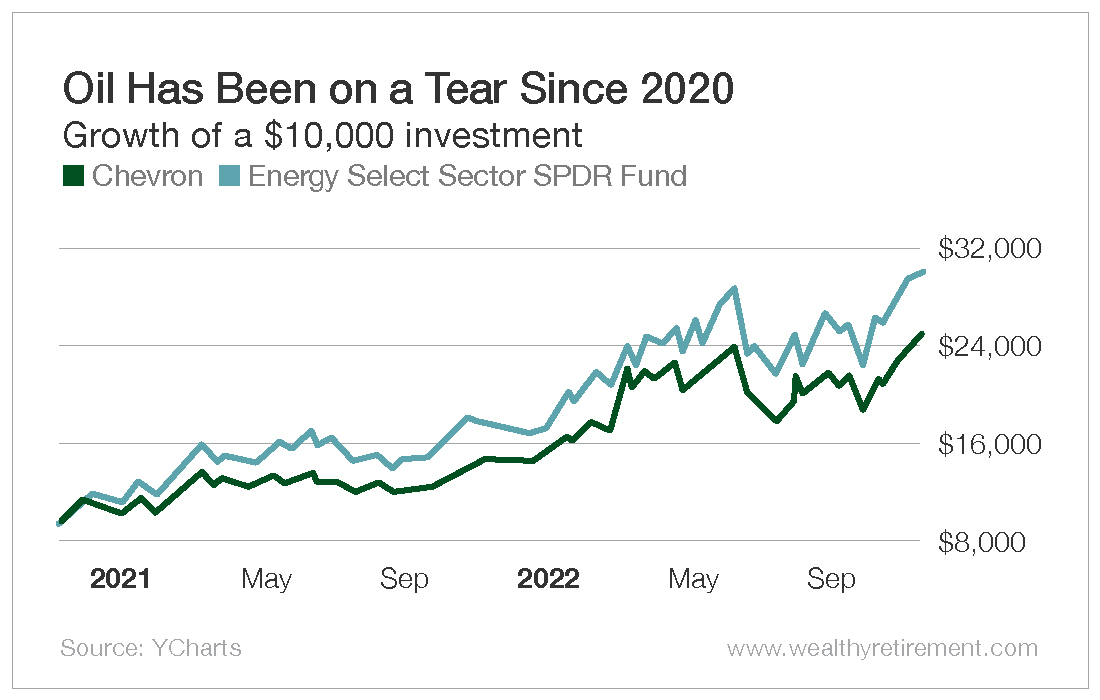 There is no way that kind of upside still exists for oil producers at their current valuations.

So while it seems cheeky of me to disagree with my investing guru, I don’t share Mr. Buffett’s bullish view about Chevron at current prices.

I’m pretty agnostic on where oil is headed over the next couple of years. And if you aren’t bullish about oil, then you shouldn’t be bullish about Chevron today.

The Value Meter pegs Chevron as being “Appropriately Valued” at current oil prices.

This article was originally published by Wealthyretirement.com. Read the original article here.
Previous Post The 23 Best TED Talks on Money, Retirement, and Aging to Help You Have a Better Future
Next Post Our 2022 Holiday Travel Gift Guide