This was not a case of me not liking Zoom the company.

In fact, I quite liked the business. Zoom was growing, had wide profit margins and generated free cash flow.

My problem with Zoom was that its stock market valuation was absurdly expensive.

I didn’t call the top for Zoom shares exactly, but I was within three weeks.

Since my recommendation to sell, Zoom shares have dropped to under $80. That is now a staggering decline of 83%. 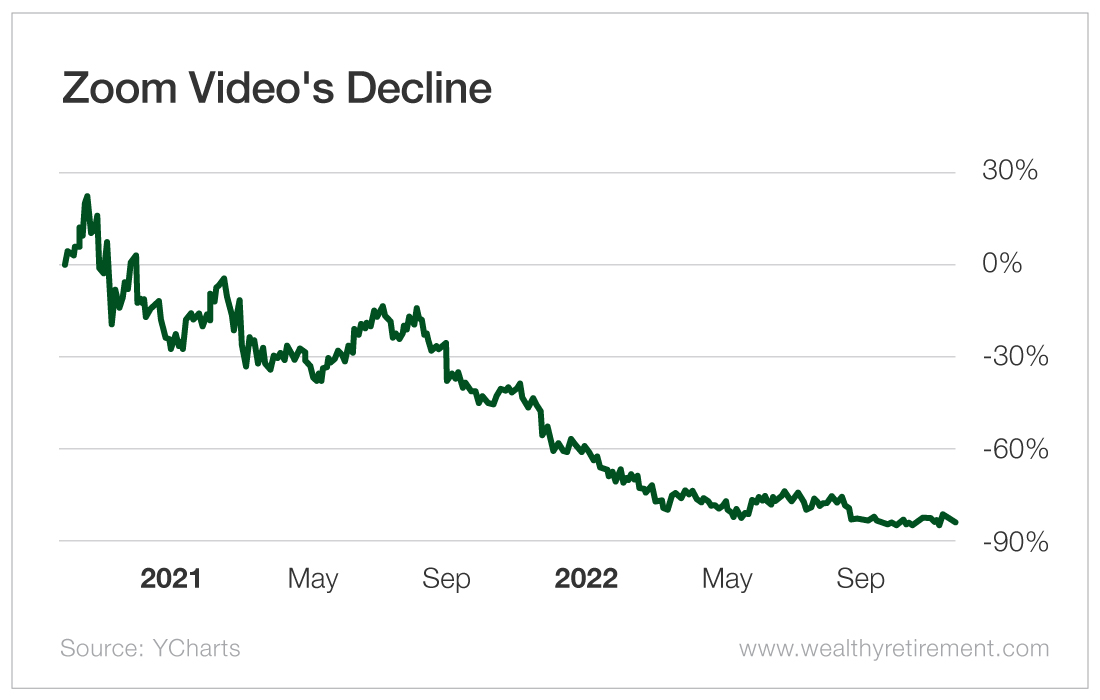 Honestly, from where the stock was trading, this collapse wasn’t hard to see coming.

When I warned readers about Zoom shares in September 2020, the company had a stock market valuation of $138 billion.

At that value, the company was trading at an obscene price-to-earnings ratio of 538 times.

There was no realistic scenario where the company could grow enough to justify that valuation. But today, things look very different.

The market is now valuing Zoom at a fraction of where it previously was. Its valuation has dropped from $138 billion all the way to $17 billion. And the valuation metrics at which the stock trades also have changed dramatically.

Consensus analyst estimates have Zoom earning $3.90 per share this year.

With a share price of $75, Zoom shares now sport a price-to-earnings ratio of just 19 times.

Unquestionably, Zoom is a much better value now. But at 19 times earnings, is the stock undervalued?

I don’t think Zoom is expensive, but I feel no reason to rush out and buy shares.

My reason for saying this is that the company’s growth has stalled.

For the company’s fiscal quarter that just ended on October 31, sales were up only 5% year over year.

Revenue next year may not grow at all and could even decline.

I don’t know about you, but I don’t want to pay almost 20 times earnings for a company that’s not growing.

Meanwhile, as I’ve always said, this company has no protective moat around its business.

Anyone can set up a video meeting platform, and the companies that are already competing directly with Zoom include juggernauts like Alphabet (Nasdaq: GOOGL) with Google Meet, Cisco Systems (Nasdaq: CSCO) with Webex Meetings, and Microsoft (Nasdaq: MSFT) with Microsoft Teams.

Those are the kind of deep-pocketed monsters that I do not want to be going head-to-head with.

With underwhelming future growth, terrifying competitors and a valuation that is not obviously cheap, Zoom comes in on The Value Meter as being just a shade overvalued.

There are much better opportunities out there.

This article was originally published by Wealthyretirement.com. Read the original article here.
Previous Post 15 Pros and Cons of Dividend Stocks for Retirement Savings
Next Post How Much Sleep Should an Older Adult Get?

How to Make Money in the “Casino” of the Stock Market