Inflation Came Slowly, Then All at Once

Last August, I shared a quote attributed to novelist Ernest Hemingway: “When asked how he went bankrupt, the man replied, ‘Slowly, and then all at once.’”

I wrote this as a warning…

A warning that while you can get away with something for a while, eventually your actions come back to bite you.

In August 2020, I sounded the alarm on the potential for runaway inflation.

The U.S. Federal Reserve and central bankers worldwide have been piling on risk with an unprecedented amount of easy-money policy since the financial crisis of 2008.

For more than a decade, the Fed took steps – like implementing extremely low interest rates, increasing money supply and greenlighting massive spending – that should have caused significant inflation, but somehow, until recently, inflation remained low.

Then, when COVID-19 hit in the spring of 2020, the Fed became exponentially more aggressive with its already lax money policy. 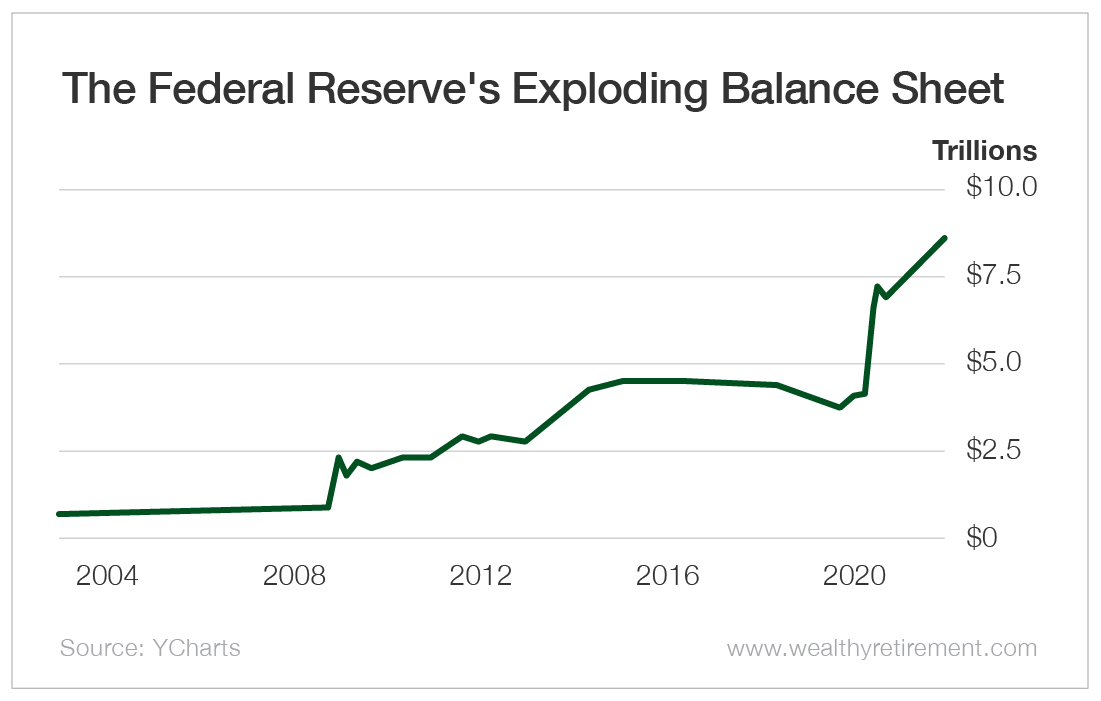 Conservative financial management is clearly a thing of the past.

With interest rates at a 4,000-year low, a balance sheet now 10 times the size it was at the turn of the century and a $3 trillion spending deficit for 2020 alone, the pump has been primed for inflation like never before.

Now guess what has happened?

Just like the man in the Hemingway quote who went bankrupt, inflation arrived slowly at first – and then all at once!

In October, the U.S. consumer price index increased by a whopping 6.2% from the prior year. 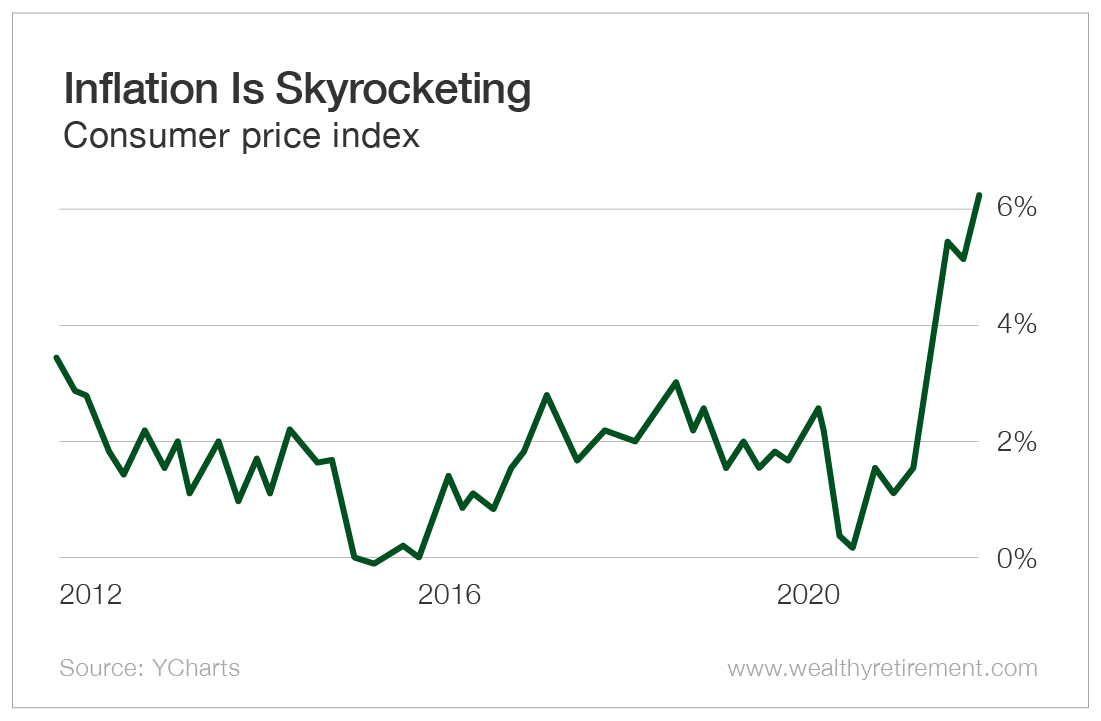 Inflation at 6.2% is more than three times the 2% rate of inflation that the Federal Reserve wants to see.

It is also the highest rate of inflation that I have ever seen as an adult, which is saying something because I’m 48 years old!

Inflation is in pretty much everything.

Food prices increased by the most that they have in decades.

If you had a rainy day fund sitting in the bank a year ago, that cash is now worth 6.2% less.

As the Inflation Fire Burns, How Is the Fed Taking Action?

Now that you know how worrisome inflation has gotten, you are likely wondering what the Fed is doing to slow it down.

The answer is nothing…

But it has assured us that it is carefully monitoring the situation.

You’ll have to excuse me if that doesn’t provide much comfort.

This is like firefighters casually “monitoring” a fire that’s already out of control.

Perhaps someone should alert the fire department that $1.2 trillion worth of gasoline is about to be dumped on the raging inflation fire.

We need to have our eyes wide open here, folks.

The inflation fire is burning red-hot, and our policymakers aren’t currently doing anything to slow it down.

Eventually, they’ll have to respond, and their main course of action will be to increase interest rates.

The last time inflation hit October’s 6.2%, the rate on the 10-year Treasury was almost 9%. That’s six times higher than where it sits today. 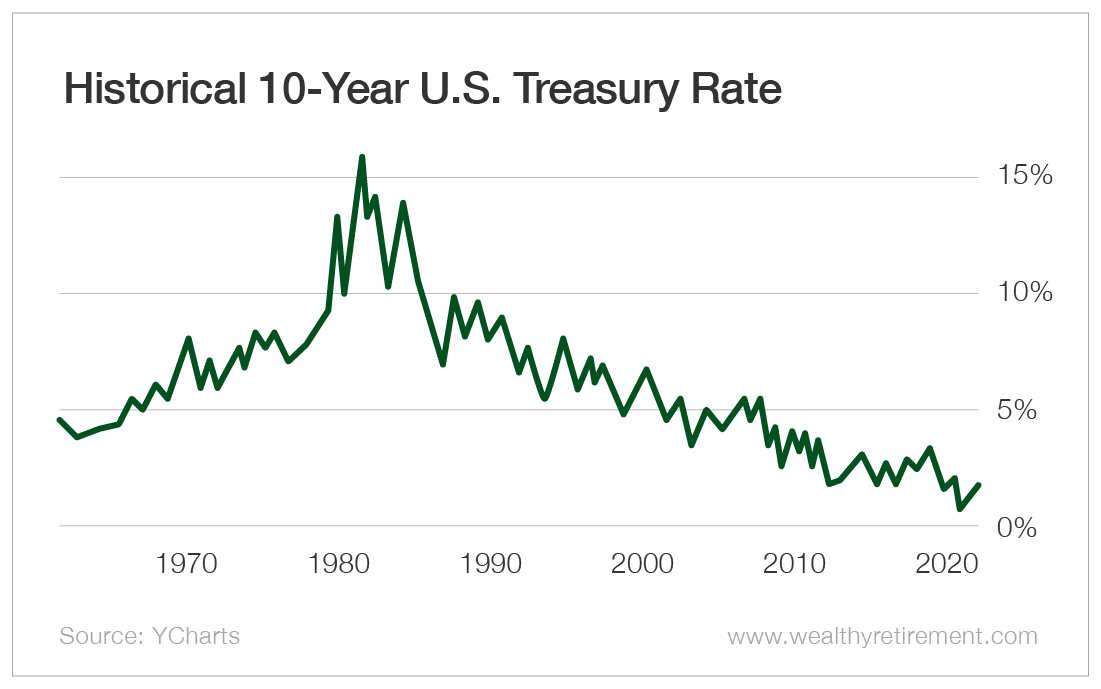 There is no doubt in my mind that in the next few years, we may see interest rates hit a level that most adult Americans have never experienced.

I warned about this inflation risk in August 2020, and I’m even more concerned today.

Since then, I’ve focused on protecting our portfolios from inflation by positioning them in sectors like banking, insurance and energy that benefit from inflation and rising interest rates.

Going forward, you can expect that I will be doing more of the same.

Rather than suffer from inflation, I prefer to profit from it.

This article was originally published by Wealthyretirement.com. Read the original article here.
Previous Post Senior Planet Book Club: The Lost Vintage (Week 1)
Next Post A 13.3% Yielder Burning at Both Ends