For 50-plus years, Charlie Munger has been the vice chairman to Warren Buffett at the publicly traded conglomerate Berkshire Hathaway (NYSE: BRK-B).

Munger is brilliant and every bit the intellectual equal to the Oracle of Omaha.

His performance was incredible.

Meanwhile, the Munger partnership increased by an average annualized rate of 19.8%.

A simultaneous $10,000 investment made in the Munger partnership would have been worth $125,428 over the same time period.

Listen to What Charlie Munger Is Saying Today

Munger has seen it all…

Even with his decades and decades of experience, he thinks the market today sticks out like a bad omen.

At a recent investment conference, Munger told the crowd that the current market is dangerously overvalued.

The parallels to the dot-com bubble are easy to spot.

Perhaps the single clearest data point is in the chart below, which shows the recent spike in the number of stocks trading at absurd multiples of revenue. 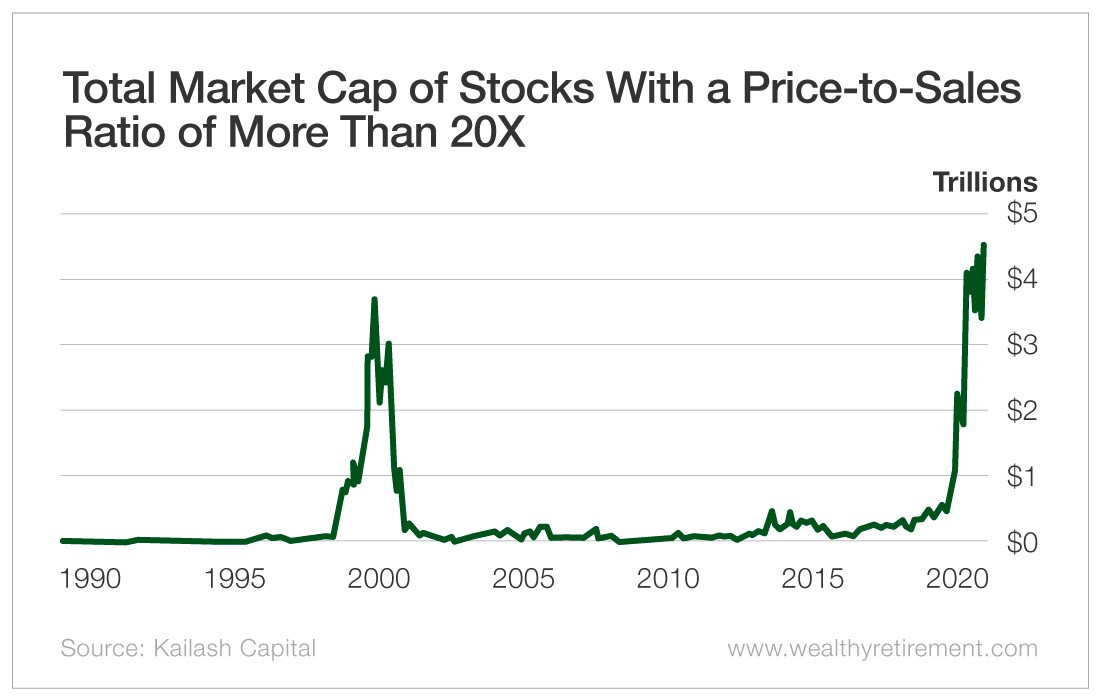 As you can see, there are now more than $4.5 trillion worth of stocks trading at more than 20 times sales today.

For some perspective, in the spring of 2000 – at the peak of the tech bubble – there were just $3.6 trillion worth of stocks trading at more than 20 times sales.

At these multiples, these companies are priced beyond perfection.

The long-term upside for stocks priced like these is minimal, but the downside is severe.

Going into DocuSign’s third quarter earnings announcement, the company was trading at the steep valuation of more than 30 times sales.

When DocuSign’s third quarter earnings were released and included a disappointing fourth quarter revenue forecast, the market took the stock out to the woodshed, as you can see below. 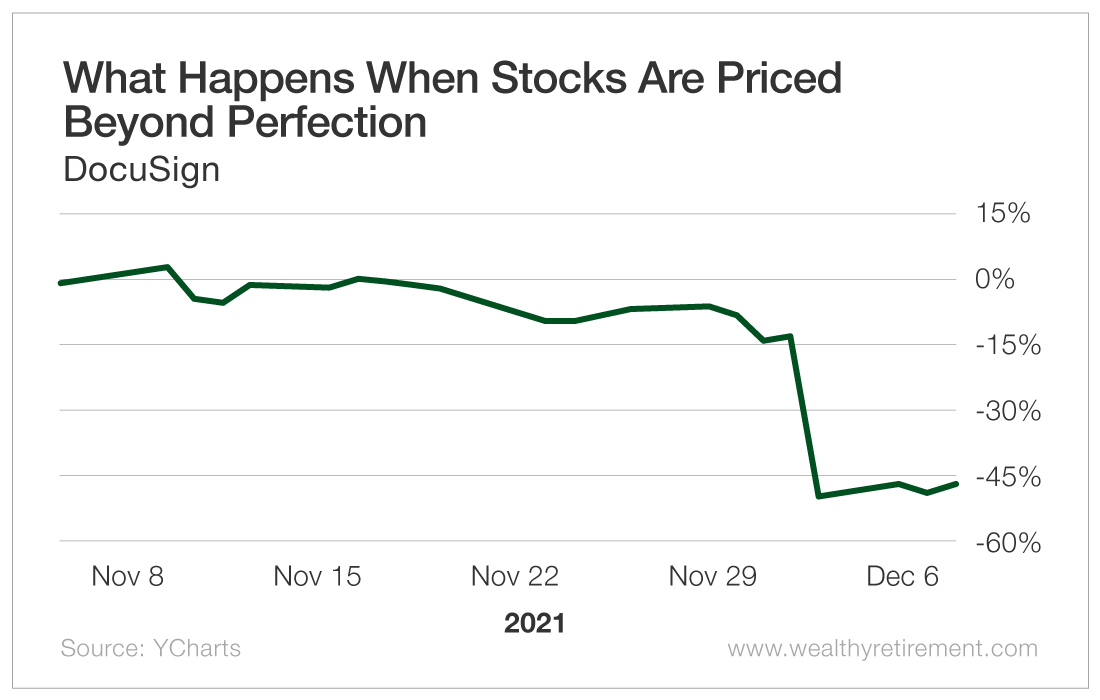 DocuSign’s shares dropped more than 40% within the day.

Interestingly, DocuSign is still expecting to grow its revenue from $545 million to $560 million in its fourth quarter.

The “issue” is that DocuSign isn’t forecast to grow as fast as expected.

At the more than 30 times sales that DocuSign was trading at, the market was pricing the company for astoundingly high, indefinite growth.

When incredibly overvalued companies disappoint, this kind of stock market reaction is what happens.

This isn’t to say you can’t find good opportunities in the market today.

Personally, I don’t think that at all.

What I’m saying, alongside Charlie Munger, is that the parts of the market that are expensive today have become ABSURDLY expensive.

These are the areas of the market to avoid.

DocuSign is only one example. Other companies to avoid include Tesla (Nasdaq: TSLA), which has an astounding $1 trillion market valuation and hardly any income being generated from its core automobile business.

These are the kind of stocks you need to avoid…

Stocks that Charlie Munger thinks are making today’s market crazier than the dot-com bubble – which ended miserably for so many investors.

This article was originally published by Wealthyretirement.com. Read the original article here.
Previous Post As U.S. Passes 800,000 Virus Deaths, 1 of Every 100 Older Americans Has Died
Next Post Does Medicare Have a Flex Card for Seniors