A Long-Term Bull Market for Oil?

The big money in the stock market is often made by going against the grain.

In November 2020, I wrote about a sector of the market that I thought presented an outsized opportunity.

That sector was the energy patch – specifically, oil producers.

Here’s what I said:

Today, the energy sector represents just 2% of the weight of the S&P 500. That is just a tiny fraction of the 25% weighting that energy stocks had in the index in 1980.

While Big Tech companies today are priced for perfection in the stock market, the oil and gas sector is priced for failure.

But if optimism returns, there is a ton of upside in these stocks.

Since then, the energy sector has gone on a tear.

Energy stocks have more than doubled a very strong performance by the S&P 500. 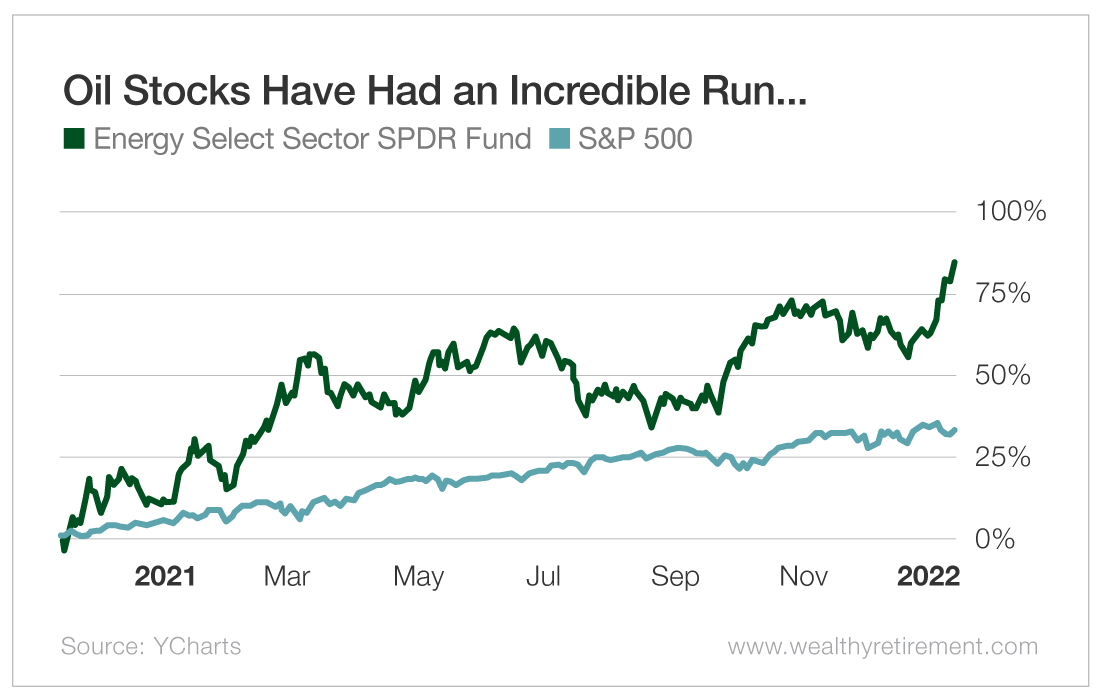 The catalyst for this energy sector outperformance has been the strong performance of the price of oil.

Again, not a surprise to Wealthy Retirement readers.

Back in March, I said that I thought oil prices were headed a lot higher because oil producers had been rapidly reducing how much drilling they were doing.

I pointed to the two major causes of supply reductions.

First off, investors are demanding that oil companies – particularly shale producers – stop their reckless borrowing and growth spending and instead return cash to shareholders.

Second, with the future of oil looking bleak, producers are increasingly unwilling to invest in the megaprojects crucial to maintaining oil supply.

As far back as November 2020, lower supply clearly pointed to higher prices on the horizon. But at that time, my bullish view on oil was still quite contrarian.

Instead, the general consensus was that the age of oil was over and the sector was to be avoided.

Since then, the price of oil has ripped higher by almost 60%. 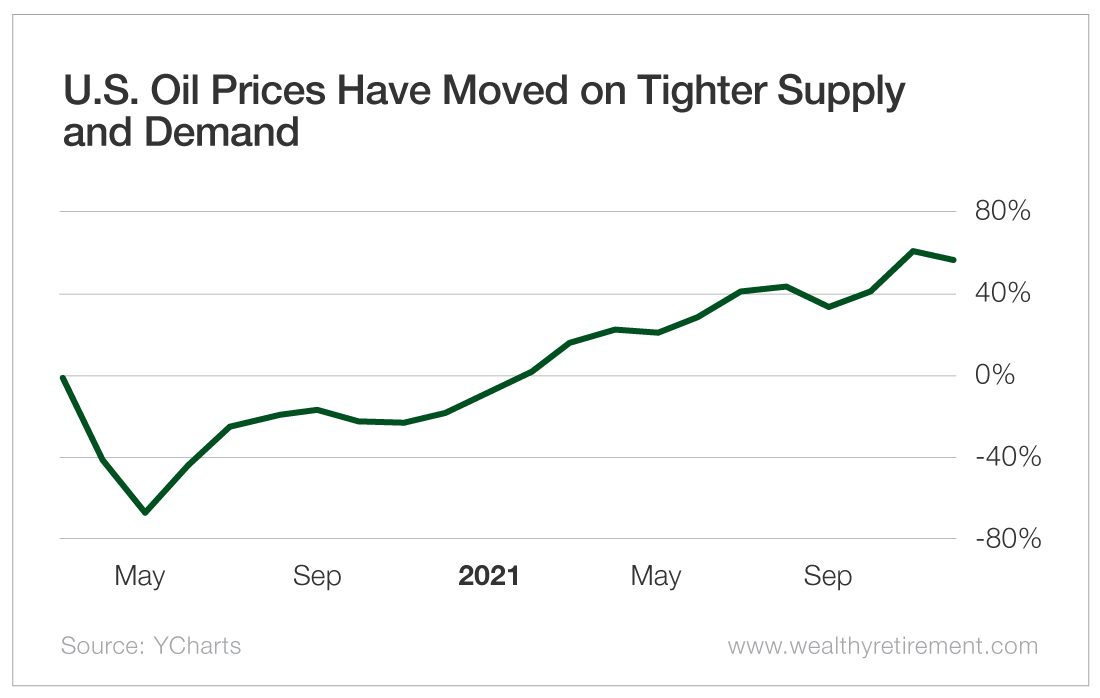 The fundamentals of supply and demand have tightened.

Clearly, being contrarian and early has worked out well for us on this oil trade.

With West Texas Intermediate (WTI) crude having just crossed $80 per barrel, there are some very aggressive price targets being made.

Goldman Sachs now believes that we have entered a long-term structural bull market for oil.

And our very own Chief Income Strategist Marc Lichtenfeld said this in the January issue of his monthly newsletter, The Oxford Income Letter: “I believe we could see oil’s price jump from around $70 per barrel to $140 per barrel in 2022.”

The analysts at Jefferies are also calling for $150 per barrel if economies keep reopening.

Those are some really bullish calls.

Surprisingly, despite these bullish views on oil prices, most companies in the oil patch still trade at attractive valuations.

My favorite is still Cenovus Energy (NYSE: CVE), which I introduced you to at the start of October. 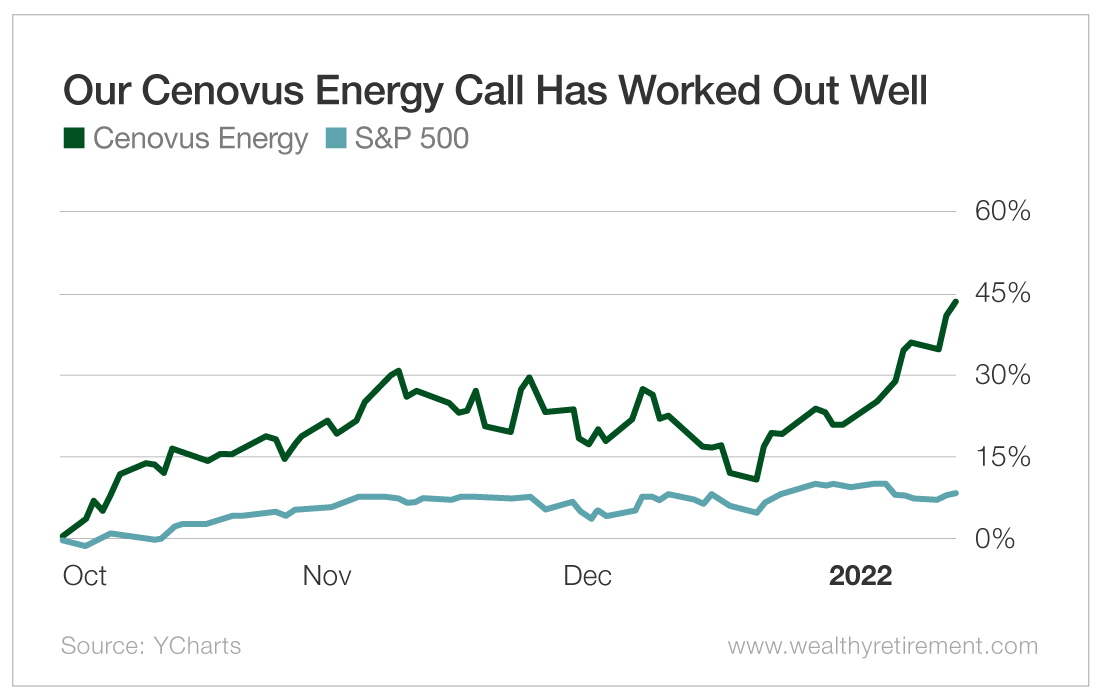 While Cenovus has smashed the return of the S&P 500 since then, I still think that the stock is cheap relative to where oil currently trades.

This company is generating massive amounts of free cash flow today, and if oil prices keep rising, it will be raking in the dough.

The first is what’s happening in Saudi Arabia.

If the Saudis open up the production taps, that will change the attractiveness of the oil sector.

So far, there’s been no sign of that happening.

The second thing to watch is the drilling plans of both American shale producers and the oil majors.

If they start showing less financial discipline and start drilling more aggressively, oil supply is going to go up.

Again, no worries on this front up to this point.

If anything noteworthy pops up on these subjects, you will be the first to know.

Until then, enjoy this oil bull market run…

This article was originally published by Wealthyretirement.com. Read the original article here.
Previous Post How to Buy Gold in an IRA
Next Post Pension Plans Offer Substantial Cost Advantages Over 401(k) Retirement Accounts