Is Now the Time to Invest in Russian Stocks?

While the majority of my portfolio is built around low-risk companies and calculated diversification, I have a tiny slice of my portfolio that I consider my “fun” money.

This slice is where I let myself take on some extra risk with the goal of generating some outsized returns, often through contrarian calls.

Usually this involves going to areas of the market that are heavily out of favor.

The area I’m talking about today fits the bill…

From Russia With Income?

The contrarian in me is currently being pulled overseas.

For the first time I can recall, I’m intrigued by Russian stocks.

Concerns over a Russian invasion of Ukraine have sent the Russian stock market into a nosedive. 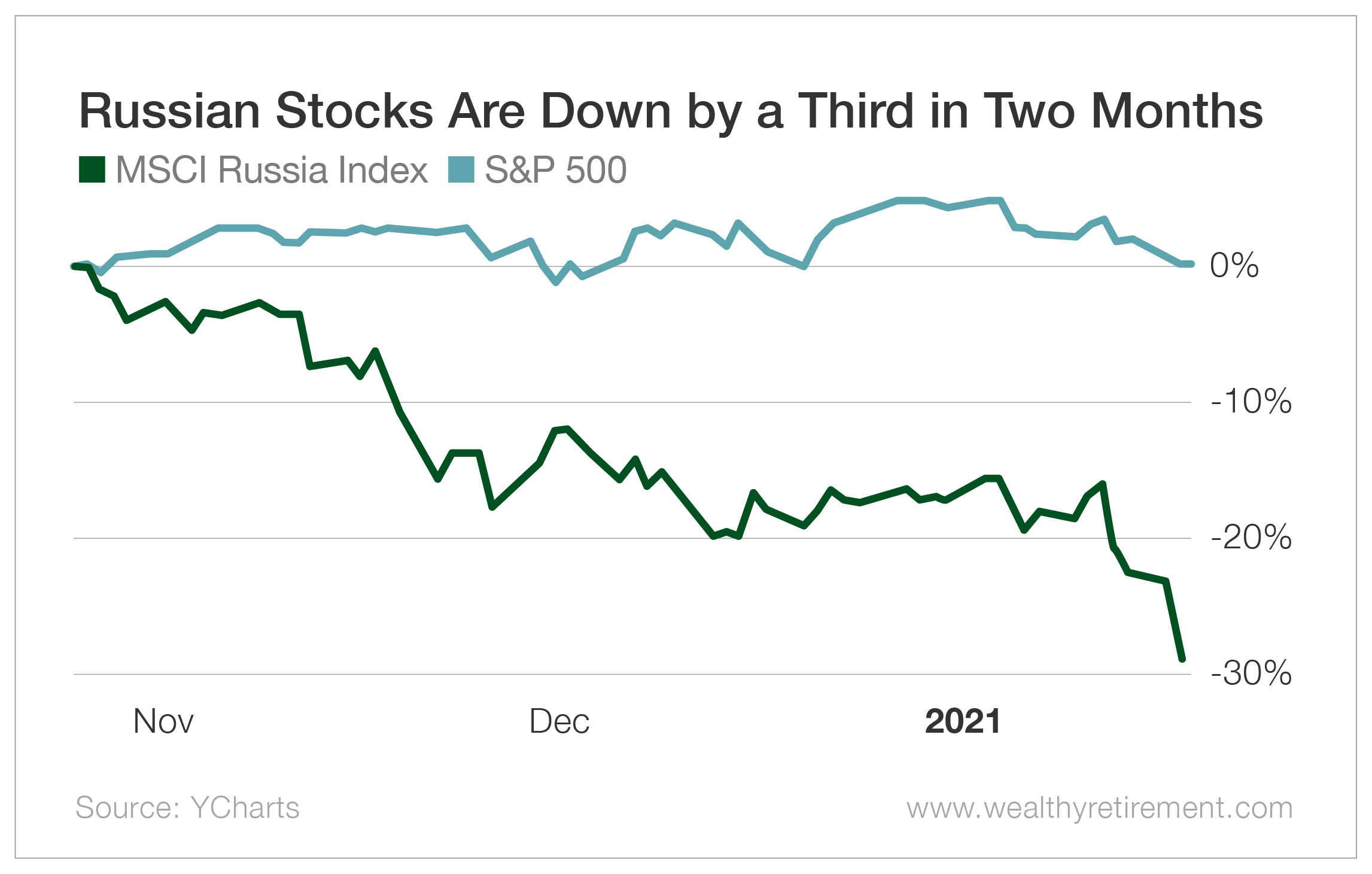 Trust me when I tell you that I’m going into this investment with my eyes wide open.

Russian stocks are about as risky as it gets when it comes to individual companies. But I’m not interested in one or two select Russian companies.

I’m interested in the broad diversification that comes from owning the entire market, which is considerably less risky.

Relative to U.S. stocks, which are trading near all-time high valuations, Russian stocks are incredibly cheap.

Meanwhile, the 29 stocks in the VanEck Russia ETF (CBOE: RSX) trade at a minuscule 6.7 times earnings on average.

With that kind of yield, Russian stocks can provide a decent return for investors even if the Russian market doesn’t go higher.

What really has my attention is the similarities I see between today and early 2000, when the tech-led U.S. stock market was extremely expensive and the world was on the verge of entering a major commodities supercycle.

I’ve recently written here and here about my concerns regarding the overall valuation of the U.S. market and the similarities between this bubble and that of 2000.

I’ve also detailed how some genius investors believe that a long period of underinvestment has set the stage for another long bull run for commodities.

Take a look at how U.S. and Russian stocks did the last time we had this combined setup of expensive U.S. stocks and a bull run for commodities. 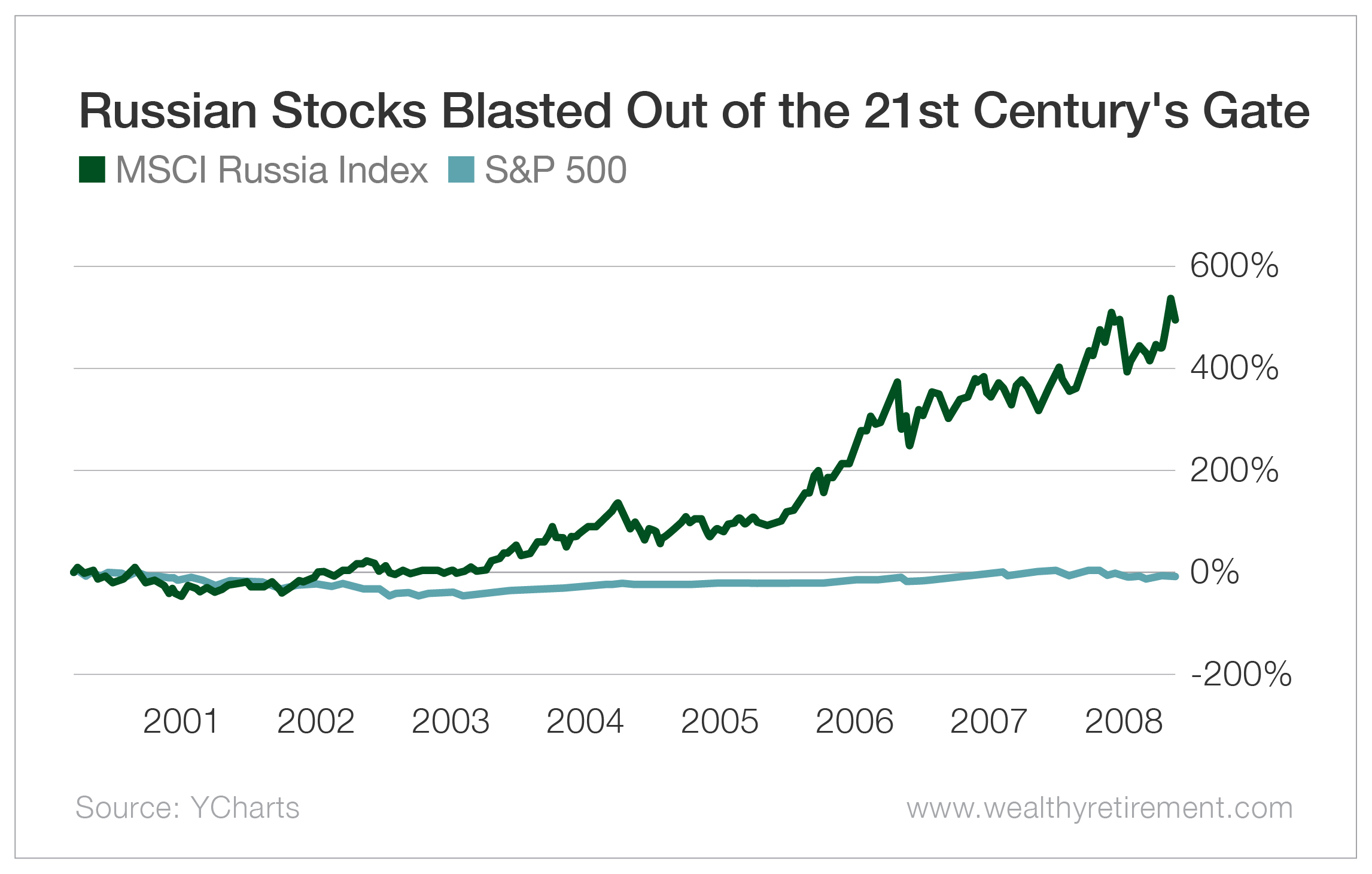 The S&P 500 didn’t go anywhere for years following the technology top in 2000, but the entire Russian market raced higher by 500%.

I don’t know whether that’s going to happen again, but I think there’s a good possibility that the Russian market will outperform by a wide margin over the next several years.

What I do know is that Russian stocks would be a great hedge against inflation given that the Russian market has 49% of its value in energy, 20% in financials and another 18% in materials.

Those are all sectors that do well in an inflationary environment.

All Eyes Are on Ukraine…

The noise over the situation with Ukraine is the wet blanket on Russian stocks for now.

The market seems to be pricing all-out war as being likely.

I have no idea how that’s going to turn out, and, of course, I hope for a peaceful resolution.

If the crisis in Ukraine is resolved peacefully and concerns are removed, Russian stocks are going to have some serious catching up to do because they should generally follow the price of oil.

While oil is up more than 27% since early December 2021, Russian stocks are down 20% over that same period. 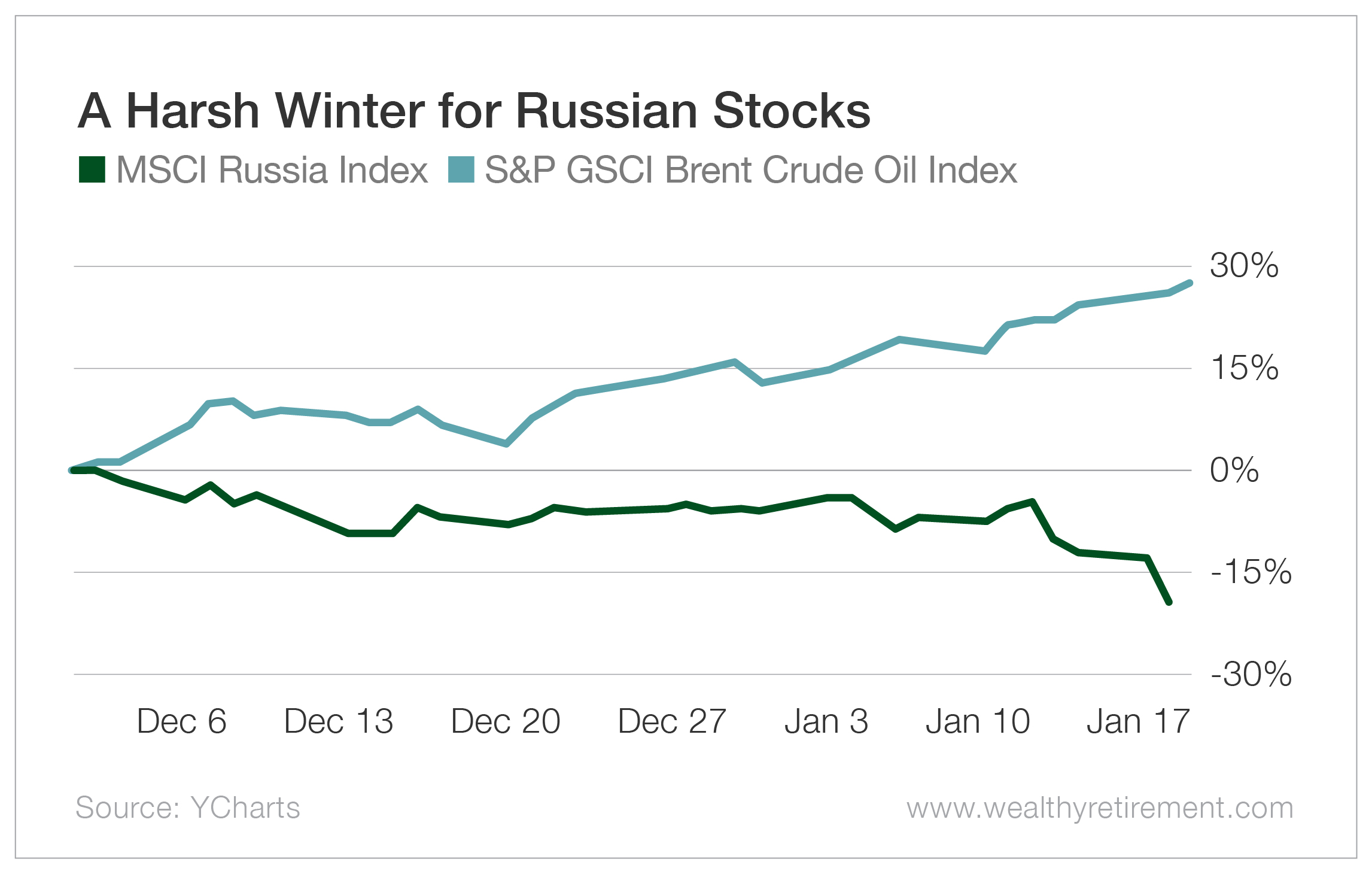 Normally, if the price of oil were up 27%, I would expect Russian stocks to be up at least that amount given the leverage they have to that commodity.

To me, that means, just in the past month, there’s nearly a 50% gap that Russian stocks need to make up.

This disconnect between Russian stocks and the price of oil has created a coiled spring. This could lead to a huge run for Russian stocks if the Ukraine situation improves.

I think it would be fun to have a little money riding on that happening.

Just make sure that if you decide to join in on this play, you aren’t risking much because this one is a high-risk, high-reward special.