Elon Musk is back on the move…

On April 4, the world learned that Musk invested around $3 billion in Twitter (NYSE: TWTR).

Musk’s move has since sent Twitter’s shares up by more than 25%.

Within hours of announcing his investment, Musk was sitting on a $750 million paper profit. 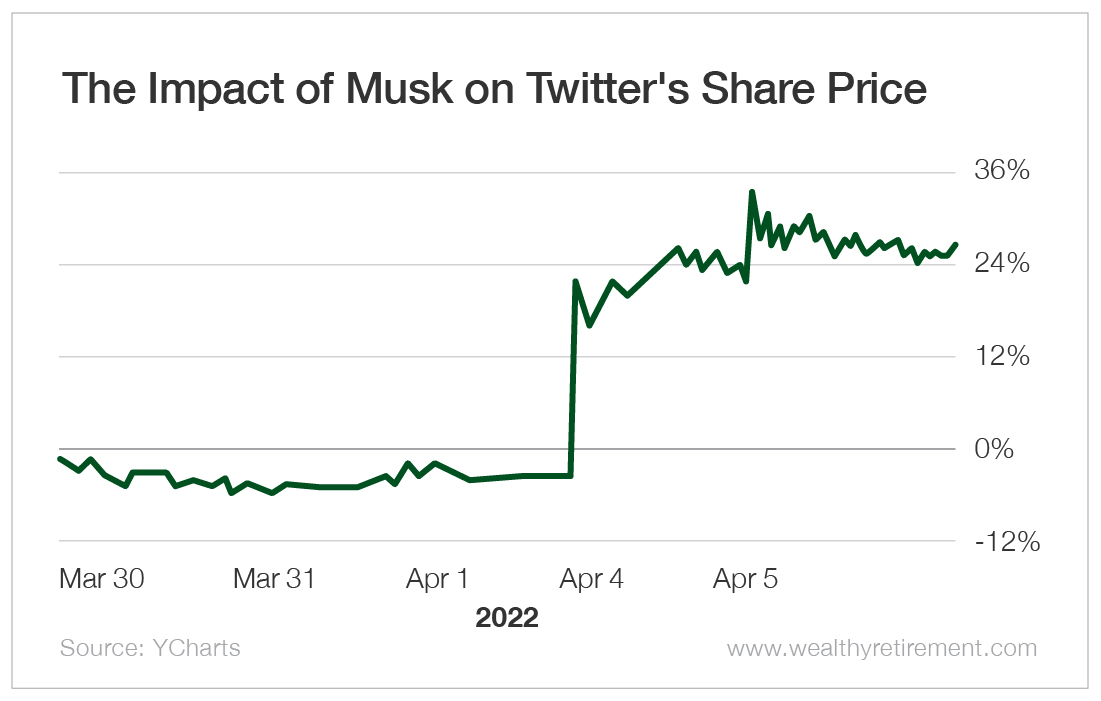 Over the past few months, quality tech stocks have become attractively priced.

On March 24, I wrote that it was time to start buying the dip in the tech sector.

Last May, I took a look at the last financial asset that Elon Musk had pumped the tires on.

That was the cryptocurrency Dogecoin, which Musk sent skyrocketing with a series of tweets.

I warned people against Dogecoin, saying, “Dogecoin will end badly for people risking their hard-earned money on something that I don’t feel ‘speculative’ comes close to describing.”

Since then, Dogecoin has fallen 75%. 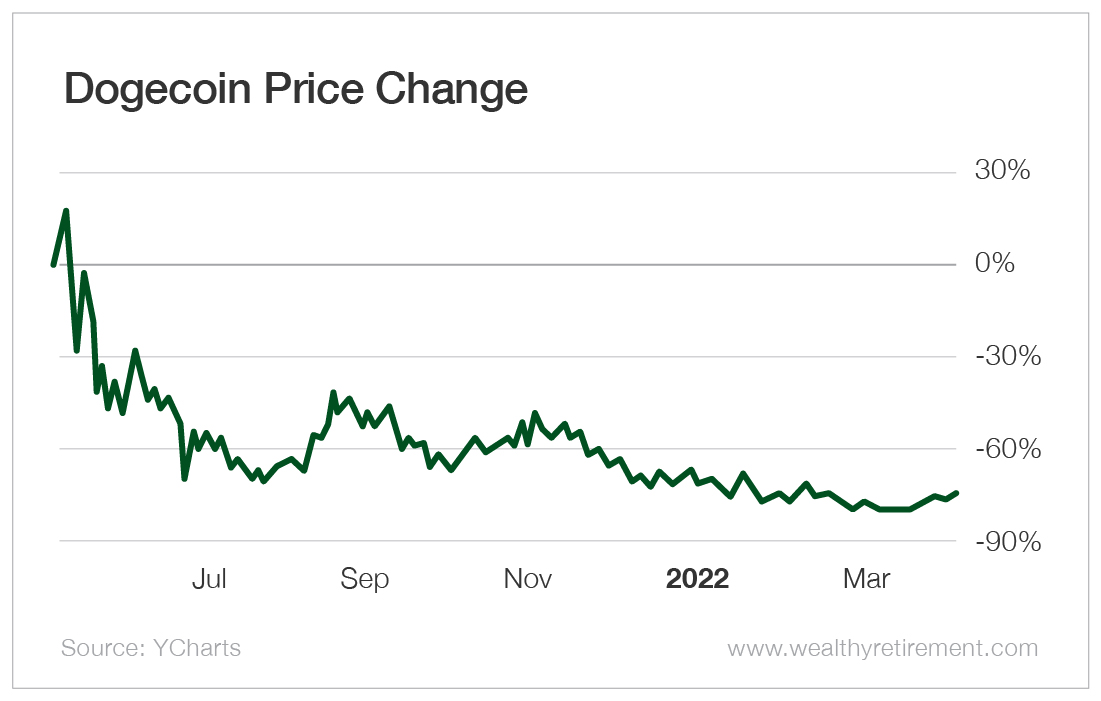 Steering clear of Dogecoin was an easy call.

Musk’s Twitter investment is different. This is a valuable company we’re talking about, not an absurdly speculative investment like Dogecoin.

The main attractive feature of Twitter is its enormous captive user base.

World leaders use Twitter. So do entertainers and athletes. As do millions and millions other less-famous people.

Tweets can have a huge reach and garner massive attention.

This company has built a strong competitive moat around its business.

Furthermore, Twitter has potentially become the most powerful news and information dissemination source on the planet.

There’s a lot of value here, but my problem is figuring out how much.

The challenge that Twitter has long struggled with is successfully generating revenue and profits from its user base.

For a company with a market valuation of $40 billion, that isn’t impressive financial performance.

Profitless companies are usually considered to be worthless, never mind worth $40 billion.

Interestingly, that $40 billion is the exact same market valuation that Twitter had at the start of 2014. That means Musk is joining some long-suffering shareholders. 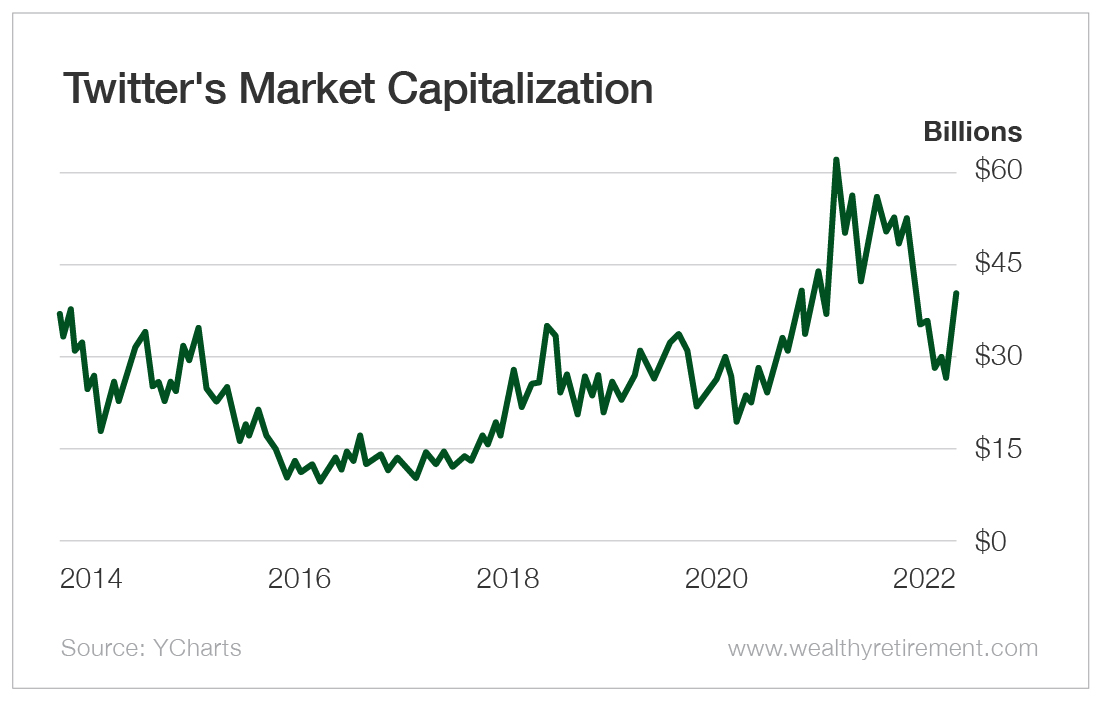 The bullish argument is that Twitter’s management has not been able to properly monetize its platform and that eventually someone who could do it, like Musk, would take charge of the company.

There’s some merit to that argument, but Musk is going to have to be the man to make the necessary changes.

While Musk has led his company Tesla (Nasdaq: TSLA) to a massive share price increase and market valuation, the truth is that Tesla has never turned much of a profit.

Musk makes cool cars and tells a great story, but generating cash flow and profits hasn’t been his forte.

Only in 2021 did Tesla’s core automaking business actually become profitable.

In prior years, regulatory tax credits were the only thing stopping Tesla from posting losses.

I fear that Musk is only going to be a major distraction for Twitter’s management team.

For Twitter shares to do well over the longer term, the company needs to somehow radically improve profitability.

With a $40 billion valuation and no profits to speak of, there’s major downside here if something doesn’t change.

I’m not saying that Twitter won’t unlock the profitability that we have all long been waiting for, but it’s been almost a decade since Twitter went public, and we still haven’t seen that profitability.

At this point, I would not hop on the Twitter bandwagon.

At the very least, we should look for a much better valuation and let this Musk-induced spike in Twitter’s share price reverse itself.