On March 31, I pounded the table on natural gas for the long term. But I should have been thinking on a shorter time frame.

I had no idea natural gas prices would go ballistic over the month and a half immediately following my call.

By May, Henry Hub had hit an intraday high of $8.70 per million cubic feet – a breathtaking increase of 60% in just 35 days. 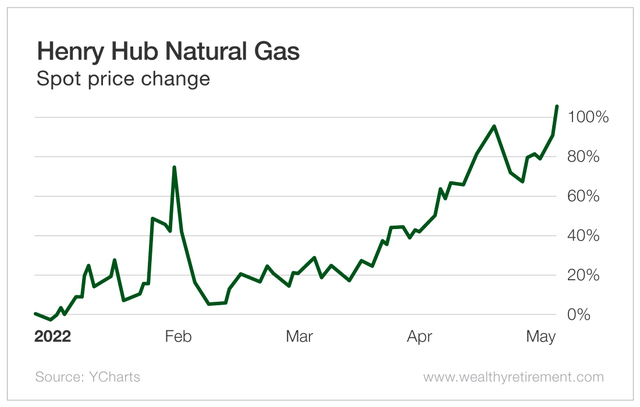 Gas prices have more than doubled year to date.

There have been two fundamental drivers behind this gas rally:

Consequently, natural gas reserves are now far below normal, down 21% from a year prior and down 17% from the five-year average.

Steady as She Goes

In an industrywide change in strategy, publicly traded oil and gas producers are no longer throwing money at drilling more wells and relentlessly growing production.

It lost the oil and gas industry and its shareholders hundreds of billions of dollars in value.

Now, in the face of shareholder backlash, publicly traded producers have adopted an approach that involves drilling just enough to keep production flat.

Instead of spending money chasing growth, these companies are now either returning extra cash to shareholders through dividends and share repurchases or using it to shore up corporate balance sheets by reducing debt.

Why this wasn’t always the strategy, I don’t know.

But I know that it’s working.

I Can’t Ignore This Valuation and Dividend Combo

When I originally made my bullish natural gas call, I noted that my favorite way to play it was buying shares of Chesapeake Energy (Nasdaq: CHK).

Since then, Chesapeake’s shares have shined in a difficult stock market. 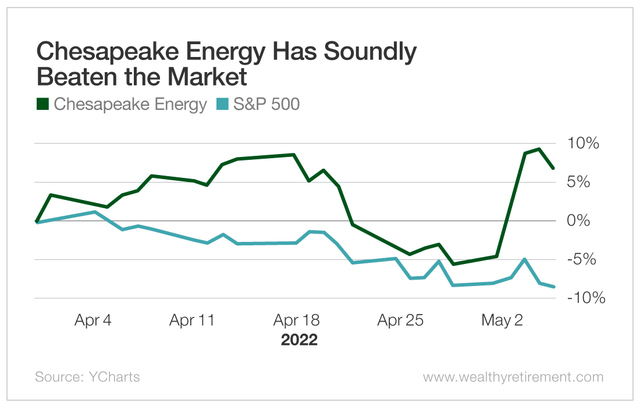 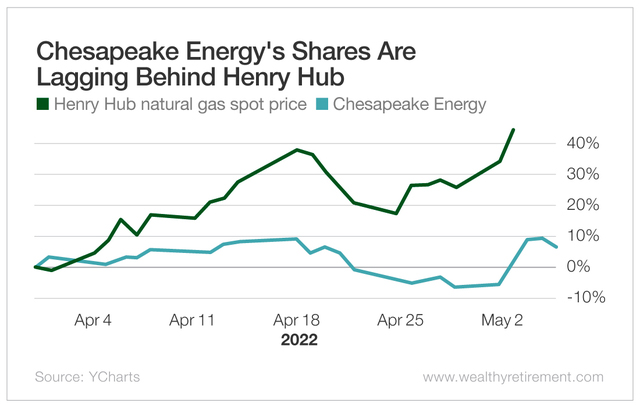 Chesapeake’s recent first quarter 2022 earnings release has me convinced that if natural gas prices remain strong over the longer term, the company’s shares will prove to be a tremendous bargain.

Chesapeake generated an all-time best $532 million of free cash flow in the first quarter, and free cash flow guidance was raised by 35% to $2.7 billion for 2022.

The company’s current market valuation of $10.4 billion means that its shares are trading at a 25% free cash flow yield.

That’s the exact same free cash flow yield that oil producer Cenovus Energy (NYSE: CVE) traded at when I recommended it at $10.78 per share on October 5, 2021.

That trade has worked out pretty well for us, as Cenovus now trades for more than $20 per share.

Chesapeake announced a quarterly dividend of $2.34 per share, which represents a 10% yield at current share price levels.

Plus, Chesapeake repurchased 1% of all outstanding shares in the first quarter of 2022 and it will be buying back more in the months and years ahead.

Natural gas is a volatile commodity, so owning shares of a producer like Chesapeake will be a bit of a bumpy ride.

But if I’m right and natural gas prices remain strong over the long term, Chesapeake is going to keep paying shareholders a huge dividend, and furthermore, it will eventually see its share price rise to better reflect the free cash flow the business is generating, which can be returned to shareholders.

This article was originally published by Wealthyretirement.com. Read the original article here.
Previous Post Senior Planet Talks to J.K. Simmons
Next Post Stock Market Corrections, Crashes, and Bear Markets: What to Do When Your Investments Go Down?