Latest:
Rapidly progressive dementia An Audit! What To Do if the IRS Contacts You Elderly Fall Prevention and Common Causes 10 Unconventional Ways to Save Money on The Heating Bill

Betty Soskin, America’s long-standing National Park Service Ranger, recently retired at the age of 100. (Learn about her here.) But despite hanging up her hat, Soskin continues to engage the public, most notably in the form of an “Informal Virtual Chat with Ranger Betty Reid Soskin” hosted by the National Park Service (NPS). We were excited to join others virtually to hear her share her experiences with the NPS and more.

Before her work with the NPS, Soskin saw first-hand the harsh realities of racial tensions on the mainland, and in the war, all while establishing a career as a Black woman in the 40s. Throughout World War II, she worked in a segregated union hall as a file clerk in Richmond, California. But it was a brief stint with the United States Air Force where Soskin experienced a defining moment.

“I was only on that job a few days and transferred out due to blackouts in Sacramento and discrimination. They didn’t know I wasn’t white,” painfully recalled Soskin.

“I pushed the park to speak to all Americans” 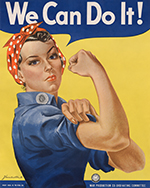 She believed she would never be hired again but Soskin would spend the next decade employed as a field representative for the state of California. This would ultimately lead to her early collaboration with the NPS, specifically curating a general management plan for Rosie the Riveter/WWII Home Front National Historical Park, among many other achievements.

It wouldn’t be until Soskin was 84 that she began her time with the NPS permanently. The NPS preserves important historic sites within its national park boundaries and educates visitors on the relics of our country’s past. Soskin, however, was influential in transforming the way NPS honored history and amplified stories that often go unheard.

“I pushed the park to speak to all Americans,” she shared during the hangout. She worked with the NPS on a grant funded by PG&E to uncover untold stories of African-Americans on the Home Front during WWII; this included pushing the park to change the way history is presented and changing the way history is often interpreted. Soskin was also vital to memorializing the role of women on the Home Front during World War II.

Here’s a trailer for a documentary about Betty Reid Soskin and the highlight of her career.

When asked about a prominent highlight of her career, Soskin lit up mentioning, “lighting the national Christmas tree and meeting former President Barack Obama.” On December 6, 2015, NPS selected Soskin to participate in a Christmas tree-lighting ceremony at the White House, where she introduced President Obama for a PBS special.

Life outside the National Park Service

But Soskin wasn’t only candid about her career; the retired ranger also joyfully described picketing Paramount Theater, growing up in a predominantly Creole community, and even dating Jackie Robinson. She even recounted a time her cousin Olga was taken to jail for a move similar to Rosa Parks.

“She got on the streetcar and there were no seats in the “black section”, but there were a couple in the front section. There was this thing, what they called the “bar”, that you could slip into the slots at the back of the seats. White people could move it back, but black people couldn’t move it up. But Olga picked it up and moved it so she could sit by herself in a seat. And the conductor got up and told her that she couldn’t do that. And she said, ‘whose gonna make me’ and he said ‘I’m gonna do that…if you don’t, I’m going to take you to jail’. And Olga was taken to jail.”

When reflecting on her legacy, Soskin grinned, sharing, “It’s so wonderful that children down the line will be wondering who Betty was.” And Senior Planet can’t help but admire what “aging with attitude” looks like for Soskin. “I’m living many lives. I’m still jumping out of bed trying to figure out what life is like.”

Hang with Soskin virtually or get involved with the National Parks Service.

This article was originally published by Seniorplanet.org. Read the original article here.
Previous Post What are I Bonds and Why I’m Buying
Next Post This Sector Has Been a Safe Haven From the Storm

A New Look at an Ancient Health Tool

Dementia is a progressive condition, meaning that it gets worse over time. The speed of deterioration differs between individuals.…