I don’t pretend to be an economist.

My Econ 101 professor barely spoke a word of English. That deflated my enthusiasm for pursuing economics in an academic setting.

But I don’t need a Ph.D. in economics to know that, over the past two decades, the Fed has been royally screwing up and that those blunders were eventually going to hurt Americans. 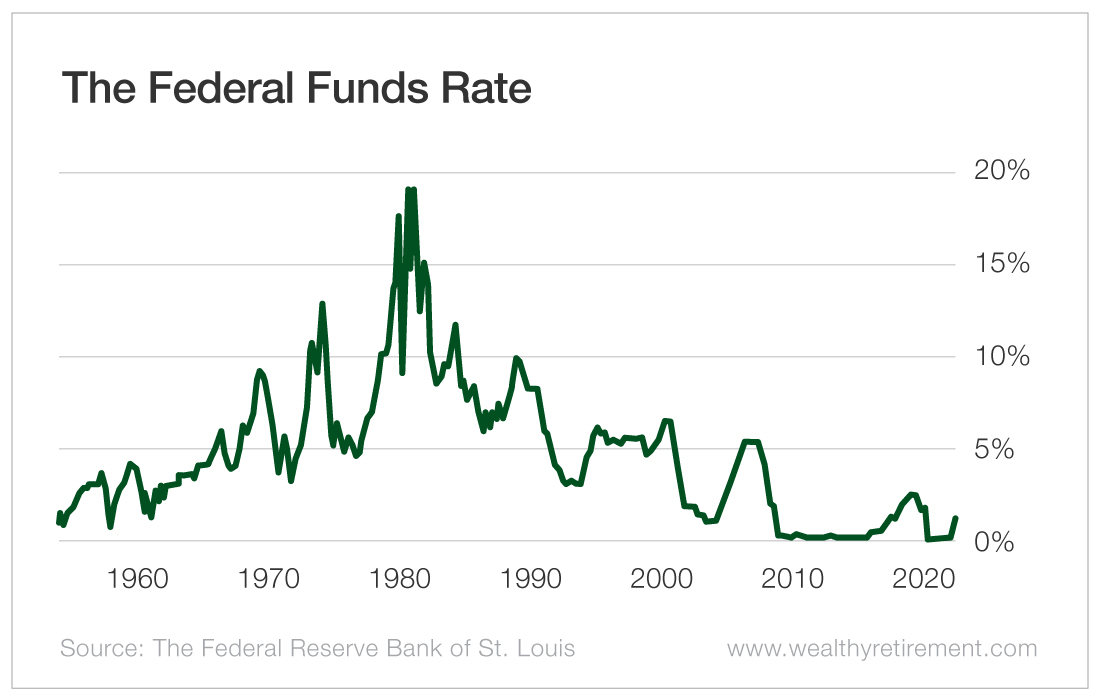 Above is a chart of the federal funds rate – the interest rate set by the Fed and a benchmark for many other interest rates.

You can see that, as far back as the late 1950s, the rate vacillated. Sometimes it was high; sometimes it was low. Then the financial crisis hit in 2008. With the economy on the brink of collapse, the Fed lowered rates to zero.

I had no problem with that. Drastic problems call for drastic measures.

But these days, in the era of participation trophies – when no one is ever allowed to experience any negative feelings – the Fed kept rates at zero for years despite a recovering economy.

Granted, the last decade wasn’t a boom time. But it didn’t need to be. Surely, in the 50 years prior, we had periods of slow growth and not once was the federal funds rate at zero.

The Fed finally got a backbone and started lifting rates toward the end of the last decade. And we know what happened next. The economy shut down because of the COVID-19 pandemic, so the Fed lowered rates back to zero – again, an appropriate response.

What was not appropriate was the Fed leaving rates at zero for so long, once again, as the economy was roaring back to life.

In the January 2021 issue of The Oxford Income Letter, I said rock-bottom interest rates, combined with other forces, meant that inflation would take off in 2021.

You didn’t need to be an Ivy League-trained economist to realize that the combination of low interest rates, never-ending stimulus checks and the reopening economy was going to push demand for goods and services through the roof. Add in supply chain issues, and we were looking at a can’t-miss recipe for high inflation.

Only, the Fed did miss – like the Yankees’ left fielder Joey Gallo chasing a slider 6 inches out of the strike zone.

The Fed should have started raising rates last year. Now it’s playing catch-up and will have to lift rates faster and steeper than it would have otherwise, lest inflation get out of control – which, at more than 9%, arguably is out of control, according to some.

The Fed’s missteps aren’t just wonkish policy that exists only in the theoretical realm. These errors have real ramifications that affect people every day. When inflation is this high, Americans struggle to feed their families or fill up the gas tank so they can drive to work.

Now, when the Fed has to raise rates in a hurried manner to keep inflation from getting really crazy – likely by way of multiple large rate hikes – it will be like slamming the brakes on the economy.

It’s really difficult to imagine that such a smart group of people at the Fed has been mismanaging an obvious situation so badly for so long.

Remember when you were a kid with strep throat and your mother would give you the medicine that made you gag? That’s what the Fed is going to do now. It will be unpleasant as the Fed raises rates over the coming months, but the rate increases will eventually cool inflation and restore some equilibrium. That’s if the Fed has the guts to follow through. Based on the past 15 years or so, I’m not convinced it does.

If the Fed can’t stomach the thought of squashing inflation and economic growth with higher rates, then the 9% inflation we’re currently experiencing is only the beginning.

Either way, we’re likely in for a few unpleasant quarters.

So… what should you do as an investor?

Here are some tips:

The rest of 2022 will likely be difficult. The good news is that recessions and bear markets typically don’t last very long. The average bear market lasts only nine months, and the average recession spans just 11 months. While an 11-month recession doesn’t feel good when you’re going through it, that’s a length of time you can handle.

If you can ride out the tough times, you’ll be in a position to put money to work at lower prices and – most importantly – generate excellent returns when we’re back to sunny skies and economic growth.

You don’t need to be an economist to figure that out.

This article was originally published by Wealthyretirement.com. Read the original article here.
Previous Post Why Dallas?
Next Post Travel Complications, and the New Terminal #2 at Tocumen Airport