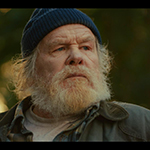 At 81 years old, Nick Nolte (at left) insists his infamous “bad boy” days are long behind him. Wed four times, he has finally found peace with his actress wife Clytie Lane, 52, with whom he shares daughter Sophie, 15, while his son Brawley, 36, lives close by in Malibu.

A three-time Oscar nominee – for his roles in Prince of Tides, Affliction and Warrior – he delivers a moving performance as a homeless Vietnam veteran who helps a suicidal young man in the 2023 release film Rittenhouse Square, telling Senior Planet how he hopes the film will lift the stigma of homelessness.

Q: You first played a homeless man in Down and Out in Beverly Hills in 1986, notoriously living out on the streets. Did you do the same for Rittenhouse Square?

NOLTE: When Down and Out in Beverly Hills director Paul Mazursky asked me to go downtown and live on the streets and try to get into a shelter, I hung out on the streets for about three days.

It didn’t take long to get into that space of being homeless. So when Rittenhouse Square director Brandon Eric Kamin presented me with this script I felt I could just take that knowledge a little further to play a full character. I already had that covered.

Q: Creativity has always been important to you. How do you find it as an older person in Hollywood?

NOLTE: Well, the material is harder to come by but there’s enough, although my way of breaking it down, lines and dialogue, has become a little bit of an issue. It’s not that bad. It’s not something that can’t be handled.

“…there’s still a place for us older actors.”

I remember working with Robert Redford on Ken Kwapis’ A Walk in the Woods in 2015. He was in his 80s and I was in my late 70s, and I thought that was probably his last film – but then he did the bank robber film, The Old Man & The Gun and other things. So there’s still a place for us older actors. 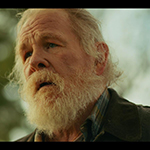 NOLTE: No. I’m not putting that in my category. If I come down with some aging disease and can’t do anything about it, then I will have to think about it. I’ve worked with actors that have reached that point in age.

Katharine Hepburn was shaking a lot when we did Grace Quigley in 1984, but she wasn’t diagnosed with Parkinson’s at that time. If it was brought up, she would just say: ‘Well my father shook, his grandfather shook, so I shake’, so she had a clever way of dismissing it. It’s just something that comes with age.

Q: Is there any person you would still like to portray?

NOLTE: That was in my younger years when I was into the literature and got to do Kerouac in Heart Beat [1980] and Steinbeck in Cannery Row [1982]. And then I ended up doing two Kurt Vonnegut books with Mother Night [1996] and Breakfast of Champions [1999] and got to know Kurt, so I feel pretty saturated. I don’t read novels now, and mostly read science news.

Q: What does an average day look like for you?

NOLTE: I wake up before light and then I take Sophie to school. Afterwards, I stop by my son Brawley’s house and watch the news with him. After, I get back home, I might work in the garden because we grow a lot of our own food. Then I usually turn to some reading or a script I’m working on. I watch a little football now and then, and go to bed early around 8 pm.

NOLTE: I work out, and get my aerobic workout three times a week. I try to stay out of heavy meat and I eat protein although I still eat meat. The people that I live with are vegan so there’s plenty of options going around.

Q: For many years you were described as Hollywood’s “bad boy”. We assume that’s no longer true? 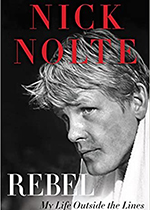 NOLTE: I wrote my biography, Rebel, a few years ago. I don’t know if my life was really that of a bad boy because I didn’t really get in that much trouble. There is some rebellion in there and then we had the 60s, which was quite an interesting decade.

Q: And you don’t even drink now?

NOLTE: No. I stopped drinking rather abruptly, and I didn’t even have to fight it. Drinking and smoking just all went away about three or four years ago.

Q: During your 55 year career, what’s your favorite role?

NOLTE: That’s a hard one because when you’re doing pieces that really interest you, they seem to be your favorites at that time. But I would think maybe the TV miniseries Rich Man, Poor Man [1976]  – playing Tom Jordache from 16 to his 40s. I was about 35 when I got the role but they didn’t know that so, to play the youth of Rich Man from aged 16, I just thought, ‘What is a 16 year old’s mindset?’  And I decided that it was the simple things which is reactionary. Whatever happens, he reacts. He doesn’t contemplate it or think about his decisions. And then I thought physically, if I could get down to the weight I was when I was a sophomore in high school, that would present that young boy’s body so that’s what I did.

Q: Talk about your your next film, Eugene the Marine?

NOLTE: I will play Eugene who is very regimented former Marine with a son and several daughters. They’re trying to get him into an assisted living situation but he doesn’t want to sell his house. So there’s a big argument with his son, and it all stems around his military training. They see him as stubborn and he sees them as greedy, trying to get their hands on the house. So that’s gonna be interesting to do. I actually just started incorporating Eugene’s routine where he gets up and does his sit-ups and push-ups.

“More than ever, you’ve got to really pay attention to your habits and your health as you age.”

Q: What do you hope audiences will take away from Rittenhouse Square?

NOLTE: That there can be real connection and cross references of the age groups, and just a very positive film. I think that’s the way it played in Philly. It surprised me quite a bit.

Q: What’s your secret to aging with attitude?

NOLTE: It’s really just a hope and a prayer that there will be another day, but I find it quite challenging. Physically, you try to just hang on to things. More than ever, you’ve got to really pay attention to your habits and your health as you age.

Gill Pringle began her career as a rock columnist for popular British newspapers, traveling the world with Madonna, U2 and Michael Jackson. Moving to Los Angeles 27 years ago, she interviews film and TV personalities for prestigious UK outlets, The Independent, The i-paper and The Sunday Times – and, of course, Senior Planet. A member of Critics Choice Association, BAFTA and AWFJ, she wrote the screenplay for 2016 Netflix family film, The 3 Tails Movie: A Mermaid Adventure. An award-winning writer, in 2021 she was honored by the Los Angeles Press Club with 1st prize at the NAEJ Awards.

This article was originally published by Seniorplanet.org. Read the original article here.
Previous Post Don’t Forget About Your Annual Financial Checkup
Next Post The best clocks for people living with dementia