Since 2013, Stafford Braxton, Founder and CEO of Santas Just Like Me, has been transforming how families of color in Raleigh, NC are represented during the Christmas season through professional photography and “real” Santas of Color. Read on to learn about the genesis of Santas Just Like Me, and how much more special the holidays are when families see themselves celebrated – either in person or virtually.

Can you describe your journey to the moment you founded “Santas Just Like Me”?

My journey has not been a straight line. I graduated in ‘85 with a B.S. in Business Administration and worked as a manager in camera retail for years. I did a short stint at a portrait studio, married in ‘91, and was a full-time campus minister for nine years. Later, I became a middle school teacher as well as continuing to develop my craft as a professional photographer, primarily through photographing events.

We moved to Raleigh NC in 2011 and I decided to try to duplicate the success I had in Richmond, VA with photography. Raleigh was saturated with photographers so I answered an ad for photographers at the Santa set at a local mall. There, I learned the business of being Santa and where I realized the need to have a business that focused on bringing Santas of color to the marketplace.

I gave the mall the benefit of the doubt when I approached them about a Black Santa event. They quipped that it was “a good idea”, but made no attempt  to provide such an event. That’s when I began looking for the person who would become the face of Santas Just Like Me.

How would greater representation during the holiday season, and beyond, have influenced you as a child? How do you feel you are changing an other-wise non-inclusive space/industry? 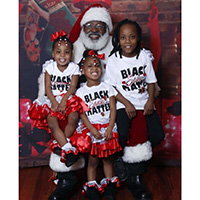 As a child growing up in Yorktown, VA, the only shows that had positive Black actors were Star Trek with Nichelle Nichols and Mission Impossible with Greg Morris. There was also Flip Wilson and a few others, but by and large, television was a Caucasian medium.

When you did see Black characters they were buffoonish (I think of Amos and Andy) or they had stereotypical bit roles as domestics, hoodlums, drug dealers, etc.

It didn’t seem like Black-America celebrated Christmas if you looked at what Hollywood was producing when I was a child of the 60s. So, to have had representation at an early age would have certainly allowed my imagination to soar higher with the thought of what might be as opposed to what was.

Is this a second career for you? If so, can you describe your early career path, your first retirement, and your decision to enter the workforce again?

This is not a second career, per se, but it is something that has allowed me to be passionate about what I do. When I see the joy on the faces of parents, grandparents, children, I know that I am in the right place at the right time, doing the right thing. I had always thought that I would be in traditional, full-time ministry, but things change and fortunately, I was willing to change with them. 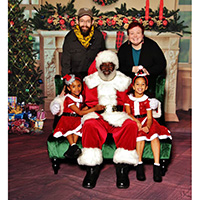 I never thought that I would be focusing primarily on Santa photography, but here I am. It was as if the Lord was saying that there are many different ways to share His love and providing people with an opportunity to see themselves represented in the Christmas narrative is just one of many. The Santas that I partner with are warm and caring and they carry the message of hope to each event.

Can you share your approach to photography, specifically photographing Black and Brown skin tones?

When photographing people of color, my approach is simply to make sure the lighting is right. You want to capture the richness of the tones of our skin, and we make sure that is conveyed in the images we capture.

What motivates you to keep doing this work? And where do you see yourself in three years? What support do you need from others to get there?

There was a family that would come year after year to see Santa at the Hayti Center in Durham, NC. It was a white family that had adopted four special needs minority children. The last time I saw them, I persuaded the mother and father to be photographed with their children. I believe it was the following year, they were all enjoying a day at the beach when a rogue wave upended the father causing him to hit his head on the ocean floor, injuring him, and causing his death.

When I reached out to the mother, she responded back thanking me for encouraging them to get their photo taken with the children. She said that it is now one of her most favorite photos.

The grandmother saw the photos and rushed down to the event because she had never seen a Black Santa in person. She was crying

In 2019, a mother and a daughter were photographed with Santa at a church event in south Charlotte and they subsequently posted them online. The grandmother saw the photos and rushed down to the event because she had never seen a Black Santa in person. She was crying – I was crying – and it just solidified that this is what I am supposed to be doing at this juncture in time.

Ultimately, I would like to partner with businesses that understand the value of representation and will help us take this opportunity to small towns throughout America. I envision a bus (or buses) converted into a Santa’s workshop, that would drive to the outskirts of NC, VA, SC, and other small towns, to share with them a Santa that looks like them without charge. I would really like to shift to a non-profit model, where money is not the focus, and I would like to see Santas Just Like Me in every state and connect quality Santas of Color, that are trained to engage with all types of children, with families.

What does ‘aging with attitude’ mean to you?

It means to not be limited by what you may not be able to do physically, but rather embracing what you can do and doing it with everything within your ability to do it.

This article was originally published by Seniorplanet.org. Read the original article here.
Previous Post 5 Reasons Why I Love My 401k
Next Post Are Reverse Mortgages a Colossal Mistake?