Disciplined Investors Use Fear and Greed to Their Advantage

To master investing, all you really need to do is read Warren Buffett’s annual shareholder letters.

Beginning with his first letter in 1973, and every year since, Buffett has used his annual communication to Berkshire Hathaway (NYSE: BRK-B) shareholders as a way to teach the world how to be successful in the stock market.

The letters are written in a way that’s easy to understand, yet they contain everything that an aspiring investor needs to know.

As Buffett explains, to achieve great long-term investing results, a person doesn’t need to be a rocket scientist.

“Investing is not a game where the guy with the 160 IQ beats the guy with the 130 IQ,” he says, adding, “Once you have ordinary intelligence, what you need is the temperament to control the urges that get other people into trouble in investing.”

The “urges” that Buffett speaks of are fear and greed, natural instincts that are hardwired into us as human beings.

Unfortunately for investors, we tend to feel these two urges at the exact wrong times and can fall victim to them.

And make no mistake about it, fear and greed are powerful forces.

Greed kicks in when stocks have already had terrific runs and valuations are expensive.

Everyone is making money, and we want to join in!

Greed is the urge that makes us buy stocks at the worst possible time – after most of the money has already been made.

If you’re feeling greedy, chances are that it’s actually a good time to be selling, not buying.

In September 2020, I wrote here about a stock that investors were feeling extremely greedy about.

The company was Zoom Video Communications (Nasdaq: ZM), a videoconferencing business that had been a huge beneficiary of the pandemic.

With investors greedily buying shares, Zoom’s stock was up 700%.

I liked Zoom’s business. (I still do.) But I didn’t like its stock market valuation.

At the time, Zoom shares were priced at an absurd price-to-cash flow ratio of 92.

It was apparent to me that anyone buying shares of Zoom had succumbed to their greedy urges for a stock that seemed to never stop going up.

At that valuation, I believed this was a stock destined to collapse.

My recommendation was to immediately sell any shares of Zoom that you owned and take advantage of this gift of a valuation that the market had provided.

Since then, my prediction has come to pass…

Zoom shares have lost two-thirds of their market value. 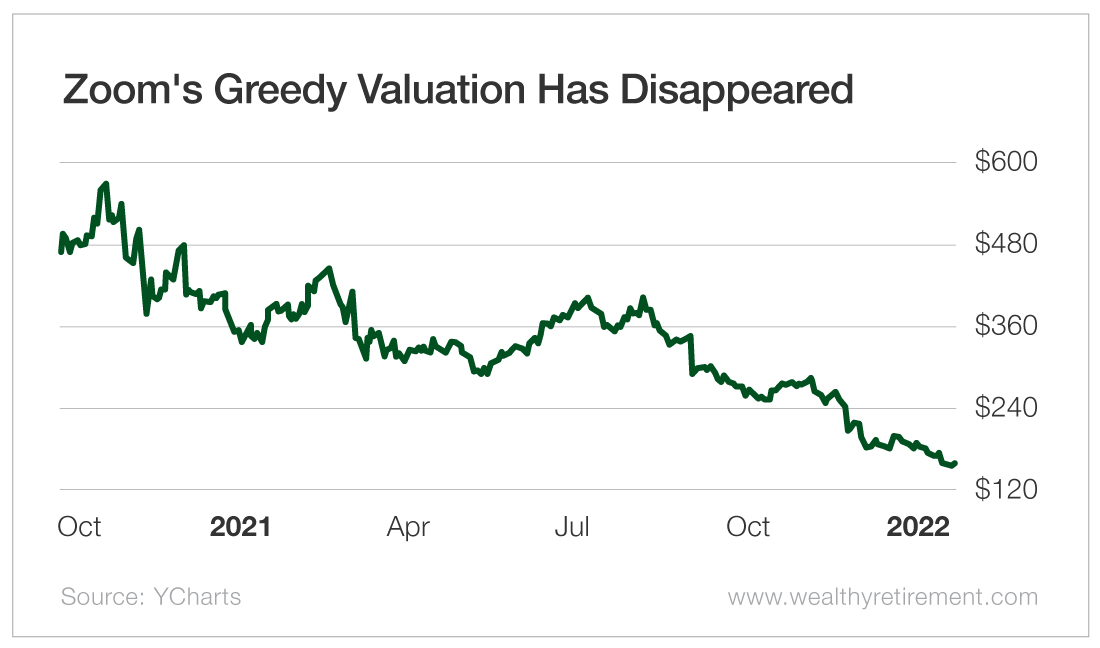 Worse yet, Zoom shares fell that far during a bull run for the S&P 500.

Around the same time in September 2020 when I was warning about investors getting too greedy on Zoom, I was pounding the table as loud as I could on a stock that the market was fearful of…

That stock was Wells Fargo (NYSE: WFC), and nobody wanted to own it.

People were afraid to own this dog that had seen its share price fall from $60 down to the low $20s.

However, my view of Wells Fargo wasn’t based on fear.

I took a look at the company objectively, without emotional bias.

What I saw was a ridiculously cheap valuation, a surprisingly solid balance sheet and large future earnings increases as almost $10 billion worth of identified expense cuts were removed from the company.

The rearview mirror for Wells Fargo was full of fearful things, but the view through the windshield showed serious potential.

It took a while for the fear around Wells Fargo to subside, but when it did, the stock went on a terrific run. 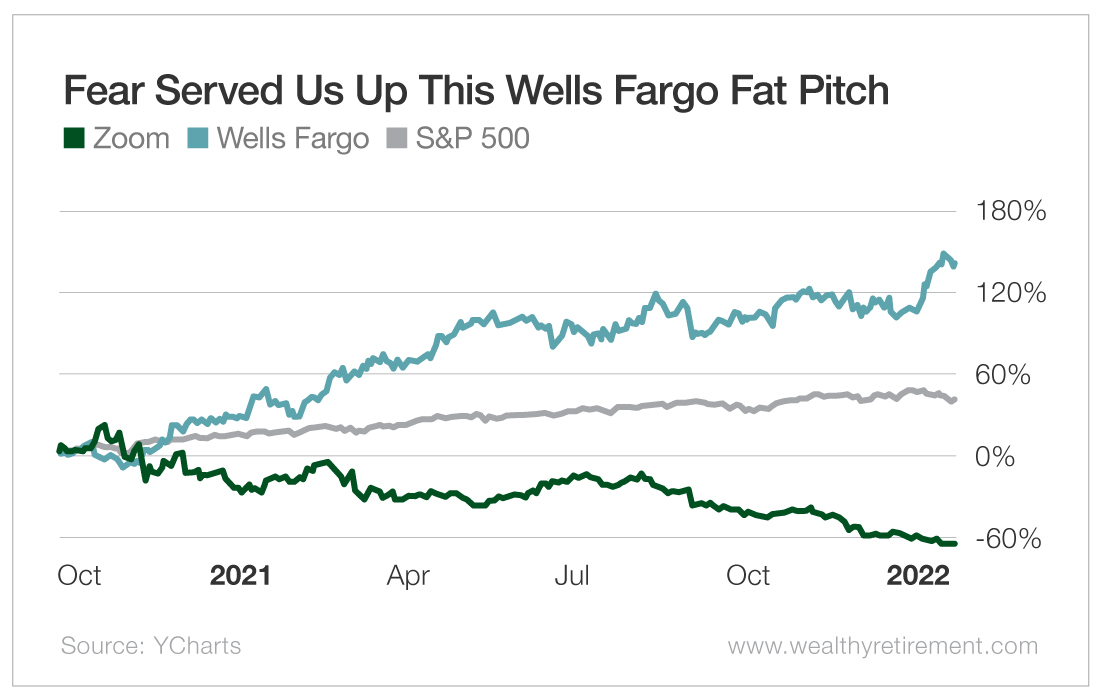 The chart above shows how Wells Fargo has vastly outperformed the market and gone in the exact opposite direction of Zoom.

With my emotions in check, buying Wells Fargo in September 2020 and avoiding Zoom were easy decisions.

The key was to ignore all emotional urges and instead just look at the objective data.

Simpler, wiser words about investing have never been spoken.

They served us well in September 2020 and will continue to serve us well in the future.

This article was originally published by Wealthyretirement.com. Read the original article here.
Previous Post Q&A: Artist Kevin Blythe Sampson
Next Post Is a Financial Advisor Worth It? 12 Tips to Help You Figure Out if You Need to Pay for Financial Advice