Amazon (Nasdaq: AMZN) is one of the greatest stocks in history. A $10,000 investment made in Amazon 20 years ago is now worth nearly $2 million. 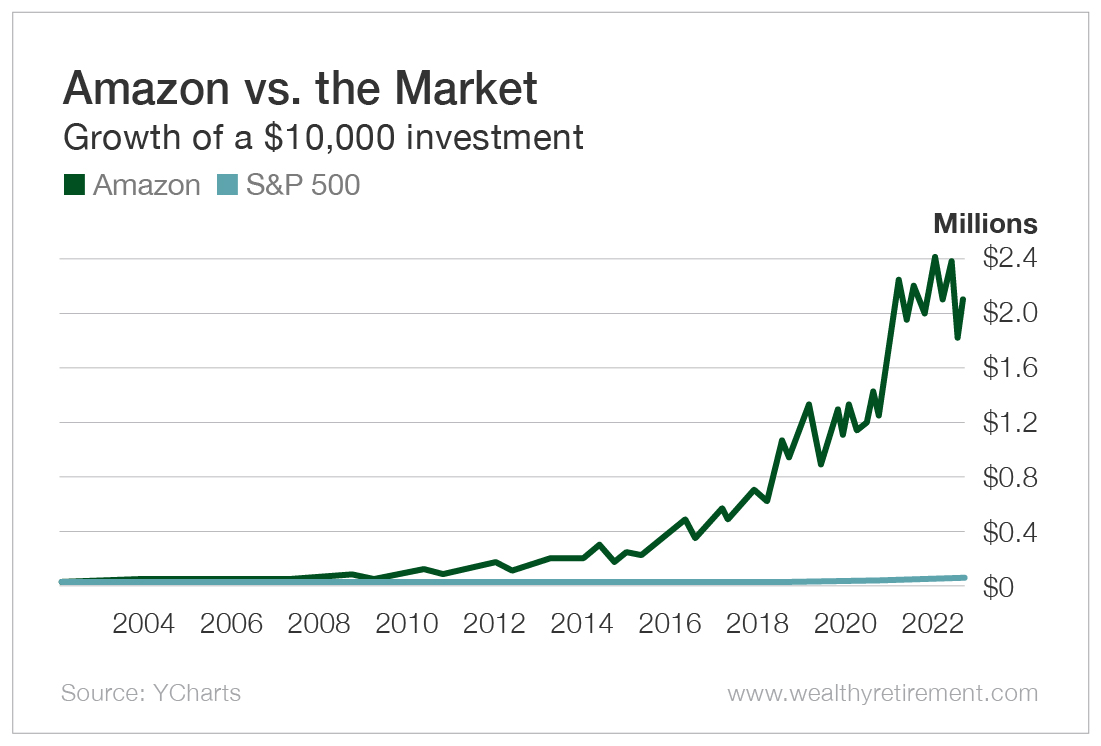 It’s been a magnificent run for Amazon shareholders.

However, the past couple of years have been different.

That is a dismal result relative to the 35% increase posted by the S&P 500 over the same time period. 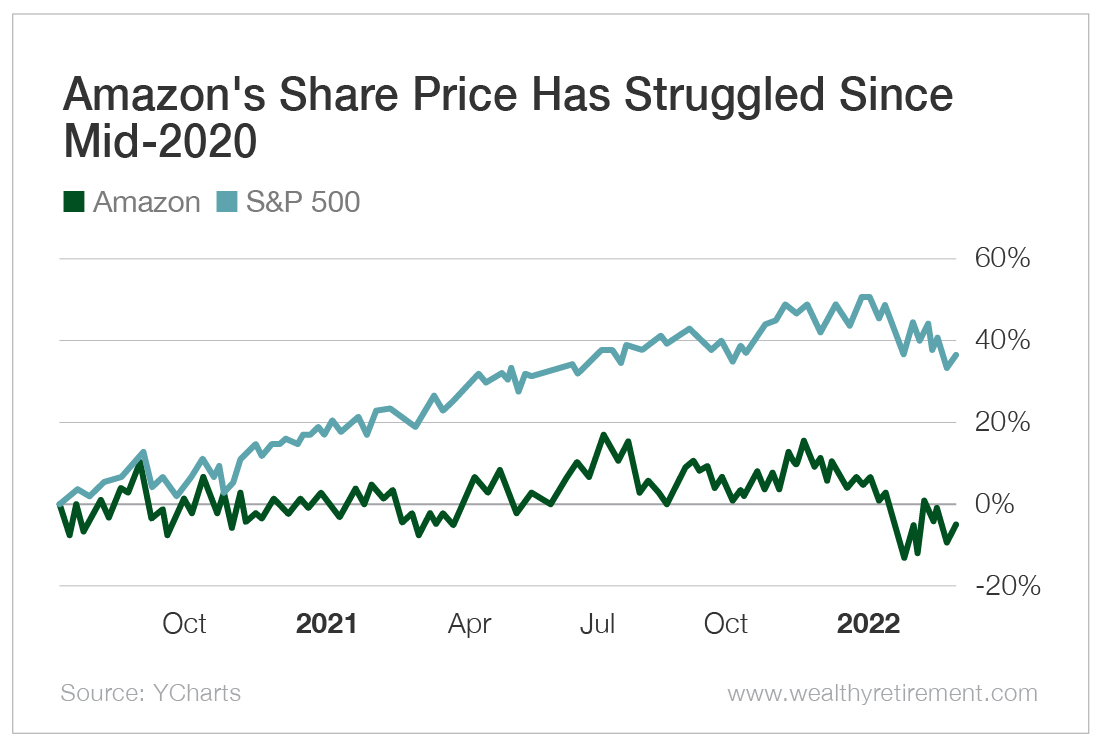 We have not seen an underperforming share price from Amazon for any extended stretch during the company’s public history.

In January, Amazon revealed that it had repurchased shares for the first time since 2012.

In total, Amazon repurchased $1.3 billion worth of its own stock in the month of January.

Most publicly traded companies continually waste their free cash flow on share repurchases by not considering valuations. But Amazon has historically been shrewd and sparing with its share repurchases.

In Amazon’s time as a publicly traded company, there have been only five quarters when the board of directors has chosen to repurchase shares.

The average 12-month share price return following those repurchases is 100%.

So as you can see, investors have been wise to follow Amazon’s lead.

If history is any indication, Amazon’s January share repurchases are a table-pounding buy signal.

Just as well, Amazon shares are looking interesting from a valuation perspective.

On an enterprise value to earnings before interest, taxes, depreciation and amortization (EV/EBITDA) basis, Amazon shares are currently far cheaper today than they have been at any point in the past decade.

EBITDA is essentially a proxy for how much cash flow Amazon’s business generates. 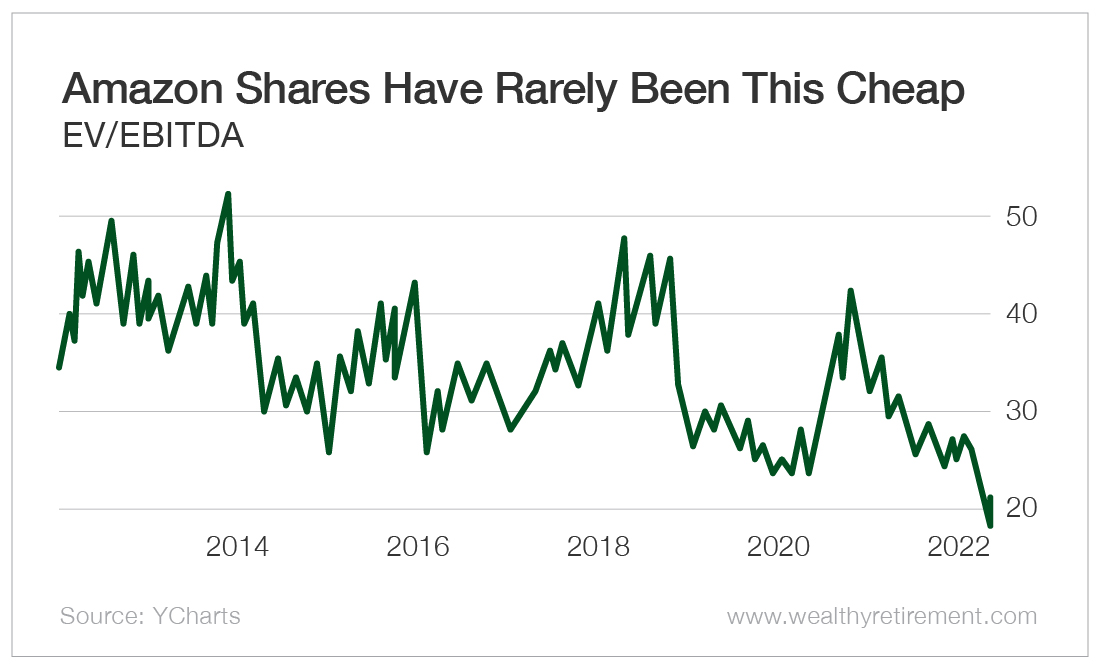 At 20 times EV/EBITDA, the stock is currently trading at only 50% of the valuation it was trading at in July 2020.

In fact, I could find only a brief moment in history when Amazon shares were cheaper than this relative to EBITDA – the bottom of the financial crisis in early 2009.

So we have two buy signals for Amazon so far: wise share repurchases and the stock’s cheap valuation.

The third and final buy signal is that Third Point’s founder and CEO, Dan Loeb, purchased a sizable position in Amazon shares during the fourth quarter of 2021.

I’m always interested in what Loeb is doing because since the 1995 founding of his firm, he has guided Third Point to a 15.1% annualized return after fees.

In his annual letter to investors, Loeb explained that he was buying Amazon shares because he believed it was a rare opportunity to own a company of this quality at what he believes is a discount of 30% to 40% to true value.

He also makes sure to point out that Amazon’s value is also still growing.

For many months, I have been warning that growth stocks, especially technology stocks, had become dangerously expensive.

Now that the correction I anticipated has arrived, we’re getting a chance to buy some of the greatest businesses in the world at increasingly attractive prices.

I like how Amazon’s valuation is starting to look today, and I would love to see the share price fall even further.

Our patience has paid off. Valuations on these companies have come back down to us.

This article was originally published by Wealthyretirement.com. Read the original article here.
Previous Post The Labor Department wants to investigate crypto in retirement plans.
Next Post 22 Ways to Cut Costs for Retirement